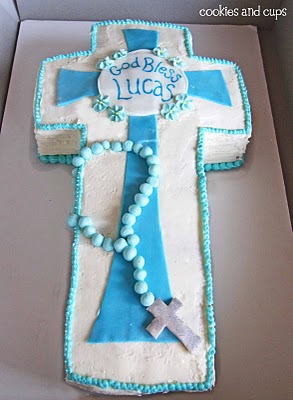 It is apparently Communion “season”.  Not unlike allergy season it tends to fall in the Spring 😉

I am not super familiar with the Catholic religion, but I do know that a lot of kids in my area are making their first Holy Communion, so “season” seems appropriate.
I am very aware of my ignorance on this subject, so by no means am I meaning to offend.
I grew up going to a Baptist church, and in Houston (where I’m from) there was (is) a huge abundance of Southern Baptist.  In my little world there weren’t a lot of Catholic people. My husband has told me that I grew up in a bubble…I’m finding that he might be right 😉
I had been to a Catholic Mass with a friend once or twice and they did things that we didn’t get to do in church…
First, there were the kneeling benches, which I had originally thought were foot rests.
Wow, they want you to be really comfortable here…sit back, get comfy..kick your feet up.
Well, we all know they aren’t foot rests…but even still…to kneel every few minutes, how very dramatic!
I loved it!
Then there was the crossing.  I wanted desperately to cross myself, but I always got it wrong.  I practiced at home in the mirror…maybe that’s why I kept doing to backwards.
My church seemed so boring compared to going to “Mass”…see there was even a special name for it…it wasn’t boring old “church”
Also the rosary beads.  A religion with jewelry.  I was clearly born into the wrong form of Christianity. 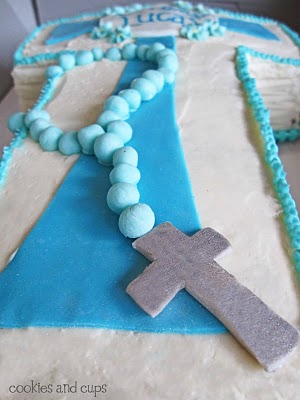 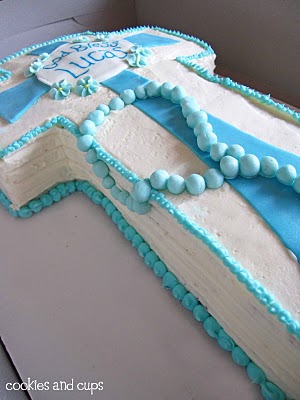 Then the pie’ce de re’sistance ~ Ash Wednesday.  Some kids would come to school with Ash smeared on their forehead…how exotic!  I was so jealous!
I went home and smeared Crayola marker on my forehead to see how I looked.
Embarrassing…I can’t believe I just typed that.
I know all this is weird, but I also ate Chapstick as a child, so there’s not a huge amount of normal over here.
Needless to say I ended up marrying a Catholic, although his religion really wasn’t a factor…
I’m not some sort of weird Catholic stalker or anything.
I grew out of the obsession…

BUT I still get to make cute cakes for kids celebrating all the things that Catholics celebrate! 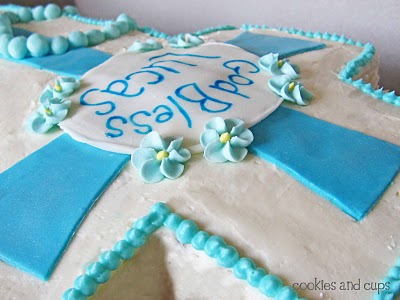 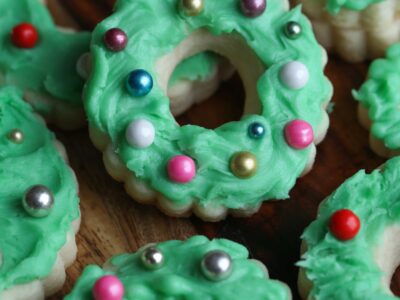 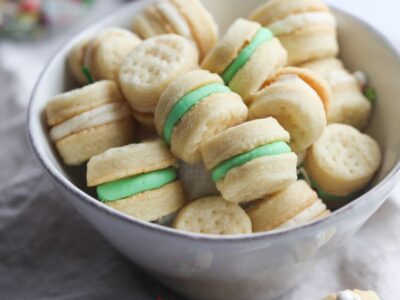 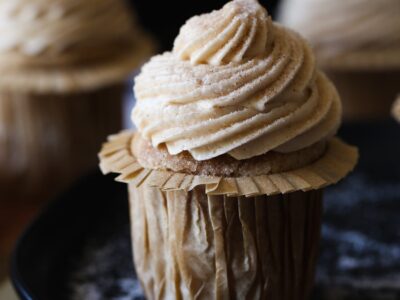 Hehehe even though I am not a Christain, I found this post very entertaining. Beautiful cake!

Great job on the cake!
~ingrid

I *am* Catholic…and I am in the library reading this post trying my hardest not to laugh out loud!!! Oh my goodness! The ashes! My mom said when I was in 1st grade in Catholic School, my class when to Ash Wednesday Mass and I wouldn't go up…I thought they were HOT ashes!!! (I guess I didn't remember from the years before?)

Anyhoo…your rosary!!! That is fabulous! I just made fondant this week and I'm thinking I need to make a rosary from it now. Would it be wrong to eat it, though?

I'm not Catholic either, but your cake is gorgeous!

Love the colors in this cake! I knew someone who ate Crayola crayons in elementary school, so trust me, eating Chapstick isn't so bad!

You mean those aren't footrests??? Ooopps! :/
I'd take a piece of that cake in a cathlic heartbeat!

While I was made to go through communion and all by my parents, I could have easily breezed through it more appreciatively if I knew I had this cake to dive into afterwards. It would have made it worth it in my opinion, lol. You always do a beautiful job.

Gorgeous cake. Being from the South I didn't grow up around many Catholics, either. But now that I'm older I see that there are in fact other religions around me. I was just a typical, blind kid!

Awesome job on the cake!

Beautiful cake!! And I agree…the Catholics have really got it goin' on…

What a beautiful cake!! So lovely.

i definitely don't know very much about catholicism, but that doesn't stop me from appreciating your lovely cake! i love the pale blue hue. 🙂

Gorgeous cake!
Great post – I married a catholic man, so I had a lot to learn too!

You are so funny! I'm still laughing. Needless to say I went to Mass and thought that my friends Baptist Church was the best, because her father was the reverend, and on days other than Sunday he let us ring the church bells and do all sorts of really cool things in his church. Even go in the room behind the alter 🙂 I'm still in contact with her family. Love childhood memory days! THANKS.
Love you cake it's just beautiful!

I run for cake!

p.s. that cake is fabulous!

Ha I loved this post! Had me in hysterics the whole way through (and as a Catholic I am allowed to laugh at these things). Communion-taking is definitely a season. I think all churches are mandated to pick the same two weeks in May to do it in.

This cake looks delicious! I would have loved it at my communion.

What a beautiful cake. You have an amazing talent. I grew up Catholic and always thought mass was so boring. Now that I am older I appreciate it much more. I also respect all religions. I think it is just so important to have faith in something or someone.
I still don't like the "peace be with you part", when we all shake hands. I am a little germaphobic. I mean why do we have to touch each other?

Love this cake!! I didn't know you are a TX girl like me!! Small world!! I grew up Catholic … and the symbolism in the Catholic church is very beautiful. I had many friends who were Baptist and attended church often with them and went to summer camps with them..it always seems greener on the other side..but I think we are all alike in that we are all out for the same thing!! Thanks for making me laugh .. I just love reading your blog!!

I grew up in the United Methodist church and am now Presbyterian, but in my area there are a LOT of Catholics and believe me they are just as out of touch with other religions. One of my best friends never realized that Protestants didn't have roseries until her son stayed overnight at our house and my son asked him why he had that necklace with him. So you are not out of the ordinary in not understanding other religions.
Beautiful cake! I'm sure the little guy loved it!

Really, really beautiful cake! I love Catholic imagery – the sacred heart of Mary pictures and rosaries…I grew up Baptist too, my dad is a retired minister.