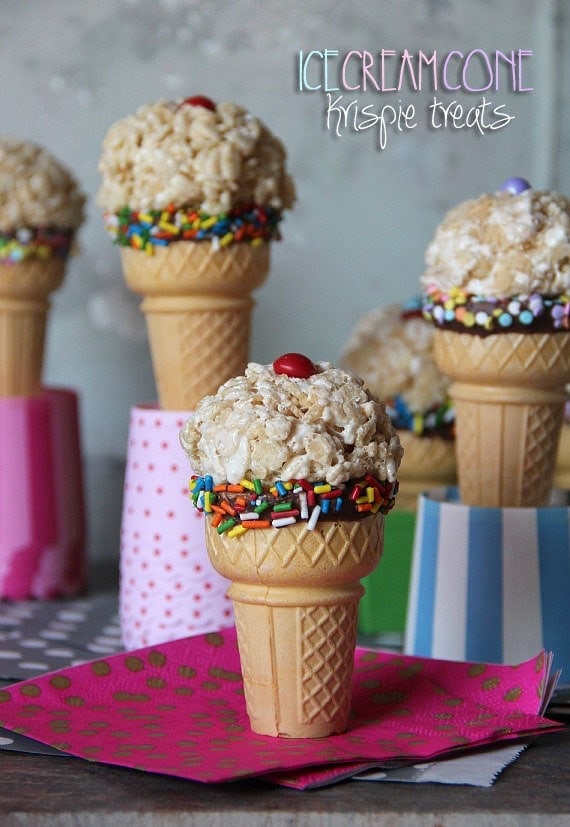 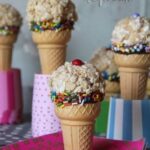 I’m gonna tell you a story.

One day there was a kid who had an end of the year BBQ for his baseball team.

That very same day his mother decided she would impress the other baseball moms by making rice krispie treats that look like ice cream cones.

Not only that, but she thought she could dip the cones in chocolate, rim them with sprinkles and fill them with M&Ms.  You know, normal Saturday morning stuff.

And honestly they were about the cutest things ever.

When it was time to go to the BBQ where the oohing and ahhing would commence the mother was ready and waiting.

During this waiting period she may or may not had to ask her child to get his shoes on 70 hundred times without him listening.

The mother carefully packaged her special treats made “for the children” and waited patiently.

ALL OF THE SUDDEN her sweet child came running down the hallway (without shoes on) and crashed right into the poor mother and her tray of Ice Cream Cone Rice Krispie Treats. 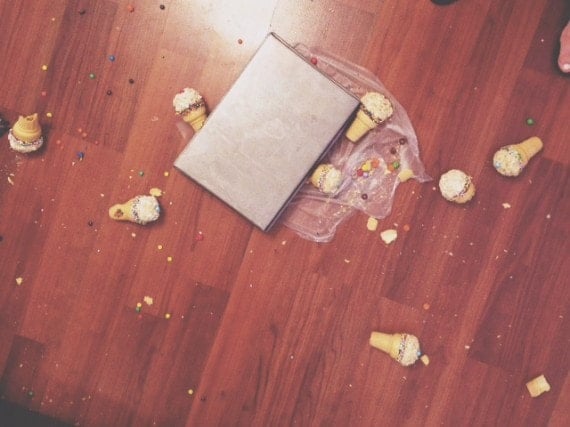 The mother’s head then exploded.

Luckily for you, the mother was smart enough to photograph her Ice Cream Cone Krispie Treats ahead of time. 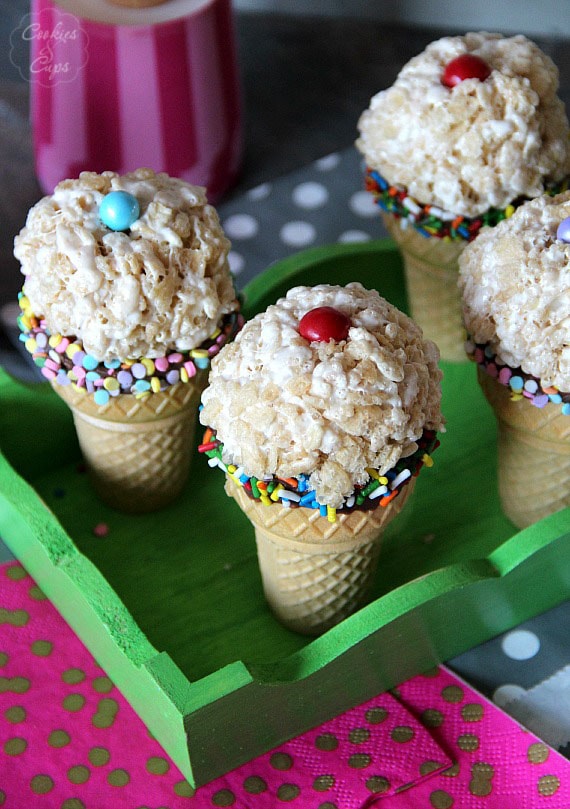 In all honesty, these are a breeze to throw together.   Shhh, don’t tell. 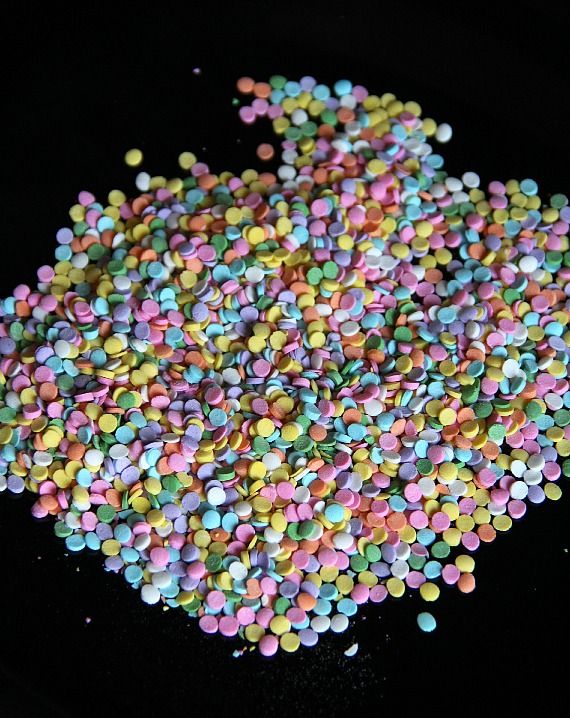 And dip your cone into some melted chocolate… 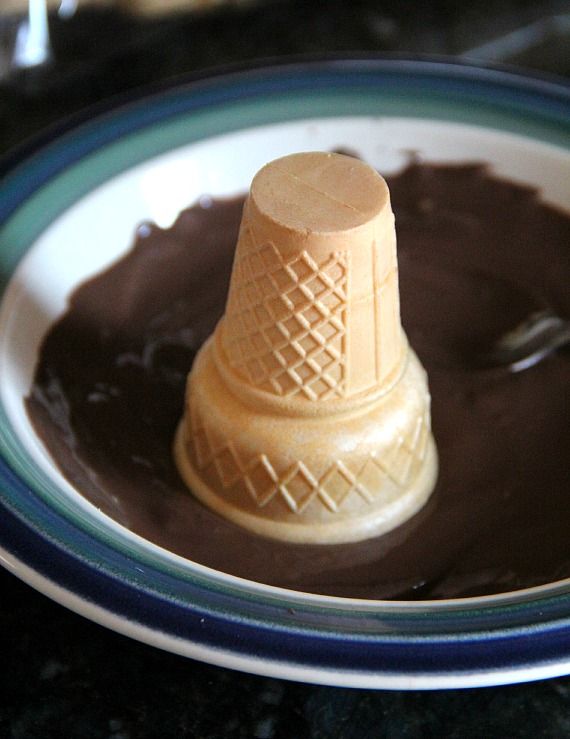 Tap off the excess… 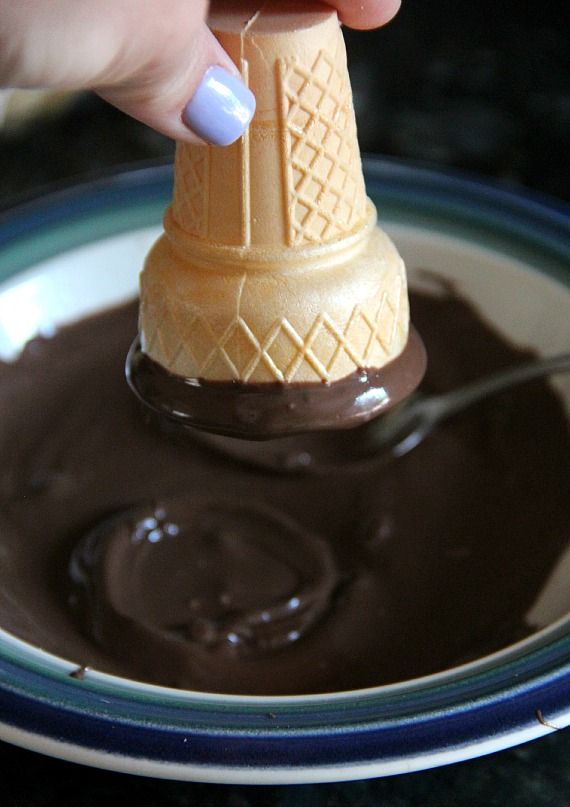 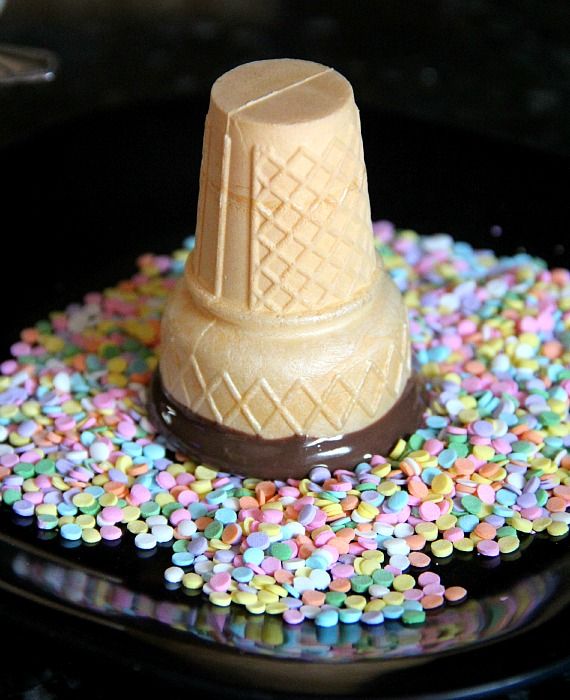 Then dip it immediately into your sprinkles.Gorg. 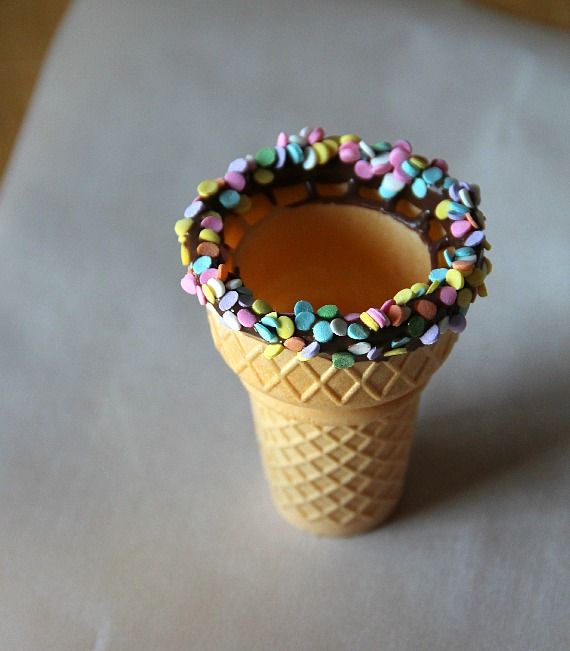 Next fill the bottoms of each cone with some candy.  I used Mini M&Ms. 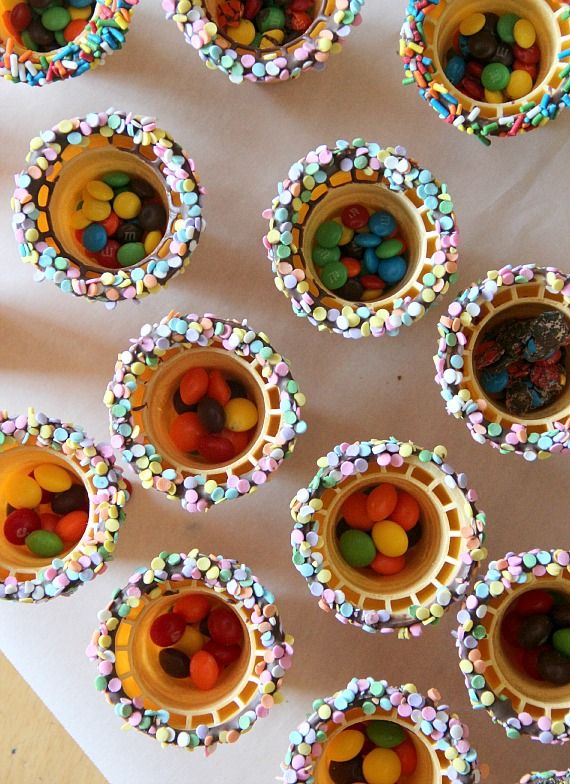 And I also used Skittles.  Taste the rainbow.Next up I made a double batch of my basic krispie treats and formed them into this shape… 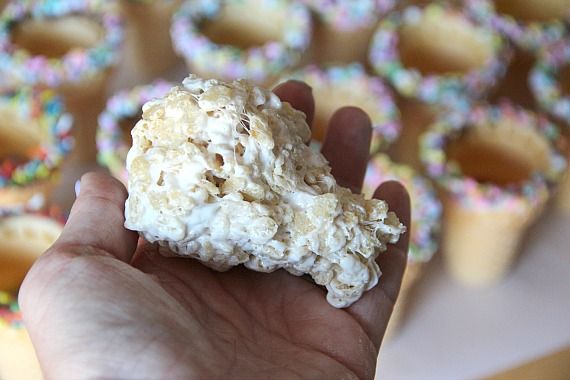 Then I mooshed them int the cone.  Very technical. 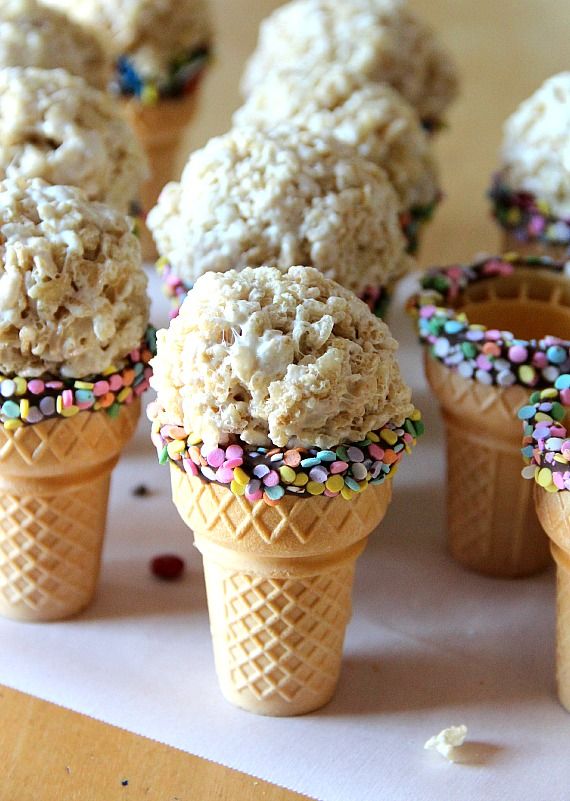 And I stuck a candy on top.  Just cuz. 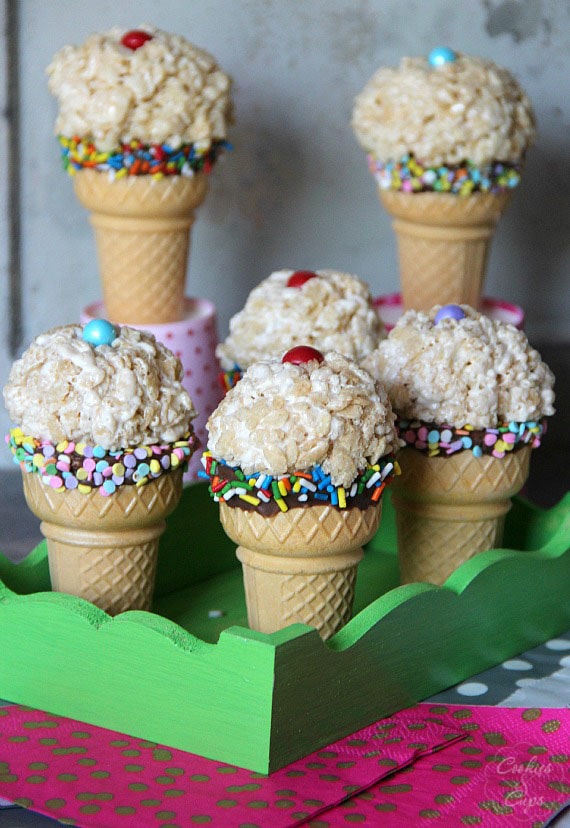 Feeling More Creative With Krispies? Check These Out!

Store airtight up for to 2 days. Best if served same day. 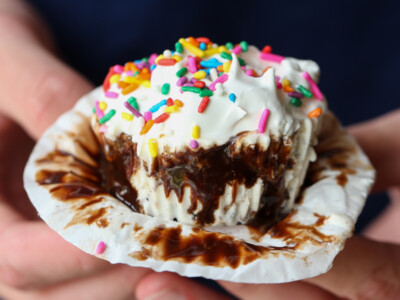 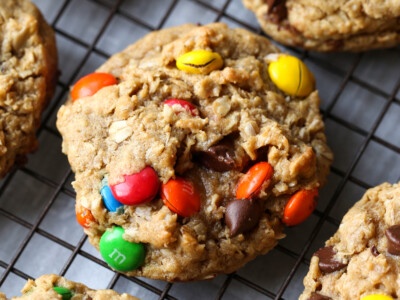 I feel very very bad that this happened to you… but I must say I laughed so hard. You have such a way with words! And these are adorable, btw

thank you for this great idea! i am going to make these as favors for my son’s 5th birthday. I could never have thought of this on my own and I just love the idea!!

What kind of chocolate did you melt? I LOVE your site!!!!! I cant wait to make all your fun stuff

I just melted some chocolate candy disks, but you could really use any kind!

Something that could have easily happened in my house. Wonder what’s so hard about getting shoes on anyway. Ya made me smile!

On another note when I was little my mom made a version of these for my classroom birthday. I still remember. It’s the best moms who make things like this for their kiddos (and don’t kill them when they wipe them out) thanks for the smile!

Glad you captured the cuteness, but so sorry you had the mishap! These are (were) adorable!

Such a sad ending to your story:( I always take photos asap too, because you never know what will happen. Glad that we were still able to see your cute treats even though they were crashed into! Hope you weren’t TOO hard on your son:)

These would be perfect party favours for a kid’s party!
So cute and I love the M&M surprise waiting on the bottom.

Let me first say, this is genius! I love it and any child (and parent) would be impressed! I definitely need to make this and make myself a hero one day. : )
Second, I’m so sorry about the mishap! Every time I’m packing up a cake for a bake sale or getting ready to take it to someone, I can almost see it smashed on the floor. I hope this will be the one and only time this happens to you.

I could see this being a great treat to make for children for school or for VBS or for a church event!

I hope the mother’s head has recovered from the explosion! These are so adorable!

Would love to have the picture of your recipes when you go to print!

Love the chocolate-rimmed ice cream cones with candy inside. Would be delicious with anything inside…ice cream or whatever. Too bad your treats didn’t make it to the BBQ. What did you end up taking to the BBQ then???

These are so cute and fun! SOOO sad that they didn’t make it to the BBQ =( Love the cute and colorful photo props =)