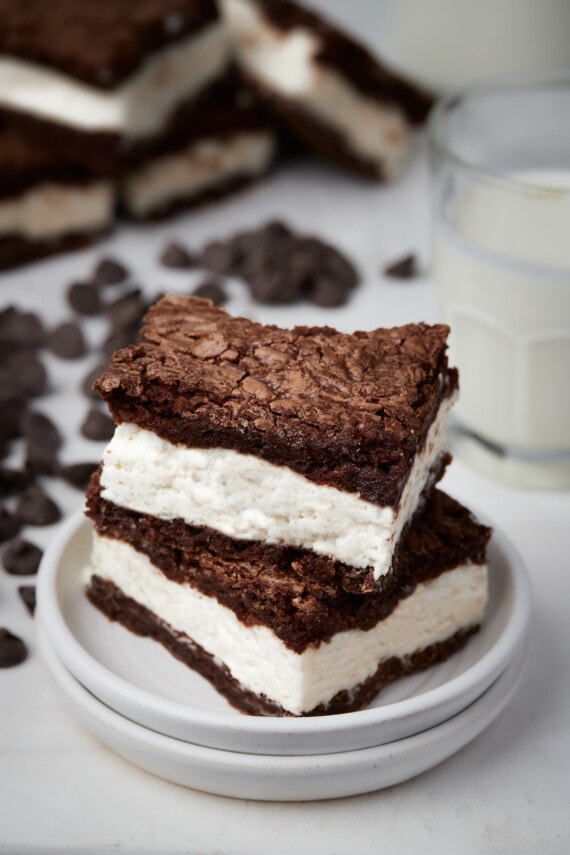 These delicious Oreo Cream Filled Brownies have all the flavor of everyone’s favorite cookie, in fudgy brownie form! Made with a rich layer of homemade Oreo Cream filling sandwiched between two dark chocolate brownies, these are the ultimate Oreo brownies!

These are Oreos in Brownies Form!

The idea for these brownies popped into my head one day while I was out for lunch with friends. I swear I was mid-conversation about something completely non-brownie related when suddenly it hit me: I needed to make these Oreo brownies. Not brownies with Oreos baked inside or scattered on top. I was going to make brownies that literally are Oreos.

Needless to say, my friends thought I was nuts. But they’re used to that by now. Fast forward to the present, and I think these decadent Oreo brownies came out perfectly! I already had a fantastic Oreo filling recipe (I mean, who doesn’t?), so I baked a brownie on the thinner side, smeared the filling over one half and then placed the other half over top like a sandwich. Tada! Oreo brownies, cream filling and all.

What is Oreo Cream?

Oreo cream, a.k.a. Oreo creme, is the deliciously sugary, vanilla-flavored white cream filling in the middle of an Oreo cookie. While the original version of Oreo cream is loaded with preservatives and artificial flavors, at its core, it’s a vanilla cream and one half of the cookies-and-cream that makes an Oreo cookie famous!

Here’s everything you’ll need to make the fudgy brownie as well as the homemade Oreo filling:

For the Oreo Filling:

Make the Brownie Batter: Melt the butter cubes and chocolate chips together in the microwave, and then stir in the vanilla. In a separate bowl, beat together the eggs and sugar. Add in the flour and salt, and mix to combine. Pour in the melted chocolate and stir until smooth.

Bake: Spread the batter into a greased and lined jelly roll pan. Bake until the center of the sheet pan brownie is set, then allow it to cool while you make the filling.

Make the Oreo Filling: Beat together the filling ingredients until smooth.

Assemble: Invert the brownie onto a cutting board, then cut the brownie in half. Next you’ll spread the filling over one half, and carefully lay the second brownie half directly over top. Cut the brownie layers into squares and enjoy!

Even though these brownies are ultra decadent, they are easy to make! I do have a couple quick tips though:

These brownies can be stored airtight at room temperature for up to 3 days. You can extend their shelf life to 5 days by storing them in an airtight container in the fridge. I’m pretty sure you will have eaten them all within a couple days though!

Can I Freeze These?

You can keep your Oreo brownies stored frozen for up to 3 months. Wrap the cooled brownies tightly in plastic wrap, plus an extra layer of aluminum foil to protect against freezer burn.

Thaw the brownies on the counter at room temperature before serving.