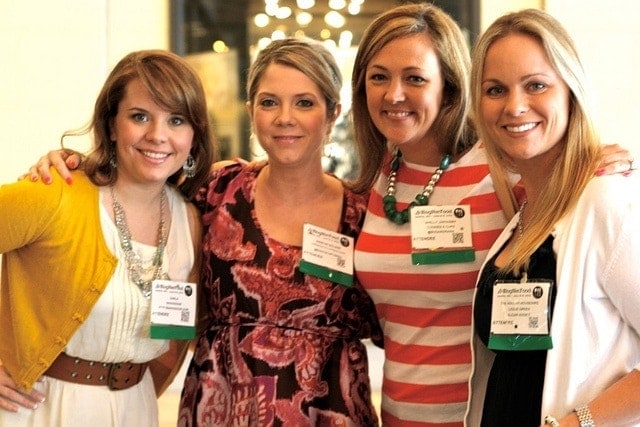 Last weekend I went on a trip.

All the way to Seattle.  In case you were wondering, that’s a 6 hour flight y’all.  I could basically fly to England just as fast.

Annnd airlines, nowadays, hold you hostage on with no food.  So basically I was fighting the fear of starvation for 6 hours.

But let’s backtrack a little.

I was headed to Seattle for a BlogHer Food Conference. And to hang out with some really cool girls.

Here’s my trip via my iPhone.

First I had to go shopping pre-trip, because I am pretty sure that on the BlogHer conference ticket it said that all attendees must wear new clothes or they would not be admitted.  At least that’s what I told my husband.

Cute, huh?
Since I was planning on doing some MORE shopping in Seattle…I decided to pack an extra suitcase.  Yeahhhh, so?

I used some savvy packing tricks and nestled a suitcase inside a suitcase, because they charge you your left eye and 4 inches of hair to check suitcases nowadays.  You have to cut corners where you can.

Here I am at the Newark airport waiting to board my flight. That guy was trying to pretend he didn’t see me taking a picture.  Doesn’t he look natural?

When I got to Seattle I was supposed to meet Leslie at the airport and share a cab to the hotel.  Her flight got cancelled and rerouted all over the US, so I took a cab by myself.

We were sharing a room with Kristan and Darla who were busy fulfilling their life-long dream of becoming full-blown Twi-Hards but since Edward held them up in Forks I was first to get to our room.

I didn’t jump on the bed or make sure there was a Bible in the top drawer or anything dumb like that.

I did, though, notice the bottled water in the room.
I decided against drinking it, though.
I mean, for real…

While Leslie was busy touring the country via layovers, Darla, Kristan and I decided that we needed to eat.
Sooo, we did the most touristy thing possible and went to Pike’s market, obvs.

That is Kristan’s picture of the mac and cheese.  I was too busy stuffing my face to think about pictures.

And here’s Kristan, Darla and I basking in carbs.  Carbs make you glowy, doncha think?

That first night we were invited to a ZipList party, where we took not-at-all embarrassing pictures of ourselves…

The top one happens to be my favorite.
Annd we ran into some of our friends! Love these girls.

I decided a cupcake nightcap was the way to go.  Here’s a vanilla one from Cupcakes Royale.

The next day we got up and decided we hadn’t eaten enough the previous day so we went out in search of the perfect Seattle lunch.  After asking for some recommendations we decided on The Pink Door.  It was so cozy and rustic…

I made the solid decision to order the low-fat grilled cheese. And by low-fat I mean, not low-fat at all.

Since we felt like we hadn’t eaten enough we decided to try out a local place that everyone goes crazy for. There was a HUGE line, which totally means it’s amazing. AT least that was our theory. The place is called Piroshky Piroshky.  I just like saying the name.

That’s Leslie’s picture, because I was, again, too busy drooling to consider my camera.

We got an apple danishy, cinnamon roll thing.  It was purty good.  No grilled cheese, but I’d eat another one.

On the way to, yet another bakery, we stumbled upon this place…

Only you dirty girls will understand that picture.
When we arrived at Dahlia’s Bakery I saw the sweetest, cutest, most adorable cake…right?

We decided to take our treats back to our hotel and have a picnic.  All that walking really builds an appetite.

Later that night we decided that we needed to eat again. I wish I could say we went to another fancy Seattle restaurant, but we got sidetracked and ended up at PF Changs.
BUT, Darla ended up getting the best fortune ever.

I am kind of embarrassed to show you another picture of sugary carbs, but we had to eat breakfast.
Dude.

And I may or may not have tried every single one of those.

The next day we went to a party sponsored by Dole and there was a chef there…Ben Ford.

This guy was super cool and apparently has a pretty famous dad.  Someone named Harrison Ford or something like that.

Oh and we just happened to walk past Yellow Leaf Bakery. We were obligated to pop in based on the recommendation of Bridget, telling us we HAD to try the Salted Caramel Cupcake. I would never want to let Bridget down.

Oh, and that stuff in the bag is “Bacon Brittle”.  Uh-huh.  It’s baconnnn brittllllle.

And this is the only picture I got of Kristan and me.  It’s not a great picture, but oh how I love that girl!

For dinner we ordered room service because we were pooped. AND because Darla had never ordered room service…making dreams happen, people.
My friends, I show you the best burger I have ever had. If you don’t believe me, just ask Amanda. We split it because it was so huge.

AND since Amanda is a huge enabler she brought cupcakes to our room for a pj party. Four cupcakes split between lots of girls…Maria, Lori, Jenny, Shaina, Tara, Leslie, Kristan and Darla…and one boy 🙂

The next morning I woke up and flew 6 hours home, back to these cute faces… 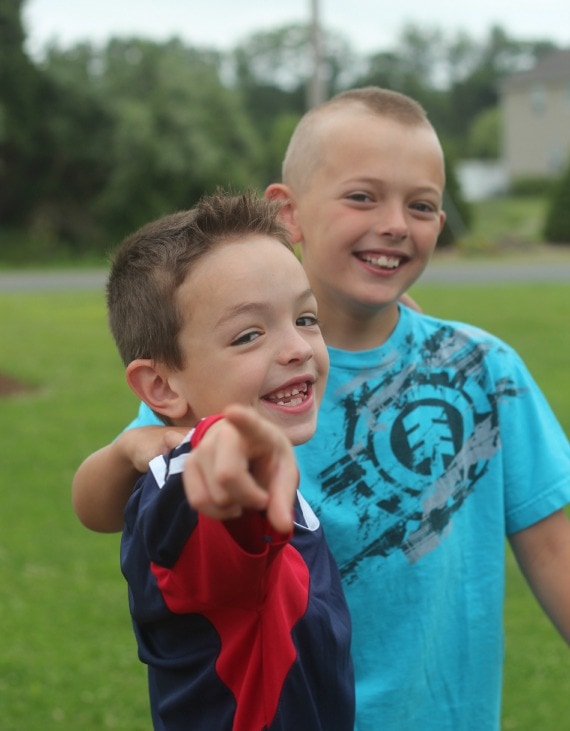 It was such a great trip.

I gained exactly 34 pounds and am not sad about any of it.

Yummy, wow, thank you for sharing.

Gorgeous! I love the photos.
Especially all the food photos…….cinnamon rollsssss

It was soooo awesome finally meeting you, Shelly! Let’s do it again! Tonight!

Love this! What a fun time 🙂 And how horrible are they to put a bottle of water in your room that is going to cost you $8 to open?! That is the most hilarious and sad thing I’ve seen!!!

Looks like a wonderful trip!! So glad you girls had a good (and delicious!) time!

Lol, I loved your blog! I gained 17 pounds just reading it!!! You are a very entertaining writer and now I want to got to Seattle so bad and go to each and every one of those places. Not gonna happen but it is nice to dream anyway!!

Thanks for the ride!!

What a fun weekend! Only 34 pounds, I think I would be up at least 50 with all those cupcakes!

I’m thinking I really need to hit up BlogHer Food next year…Mainly for the food. What?! There are sessions too? oh whatever.

You are the funniest thing. I read this post out loud to my husband and we were cracking up particularly at your suitcase within a suitcase (brilliant) and the guy pretending not to know your taking the pic (hysterical). Hopefully I’ll get to the Blog Her conference next summer and I can join in the cupcake taste-testing.

thanks!! YES! Hope you can make it next year, it was really a great time!

I’m a moron. I never realized that was you the WHOLE time. Wow. I am really losing it. I wish I could have talked more to you!
Glad you had a good time in Seattle.

I just thought you didn’t like me! Nah, just kidding…there were so many people there it was hard to get to every one 🙂 Next time!!

Let’s just say BlogHerFood fell on the worst possible weekend of all time. Everything and I mean EVERYTHING was going down that weekend. My brain was fried. Obviously. 🙂
If you are going to IFBC I am going to that.

Looks like a FABULOUS trip! The food — yum. The peope — yay! The price of water — ICK! And Escala? giggle giggle 😉

Looks like you had a fabulous trip! Wish I could have hung out with all you lovely ladies!

Am I a lame stalker because I read about half the blogs of the people you posted and I feel so lucky to read about your adventures in Seattle? You are like celebrities to me. Sooooo wish I had been there! Next time y’all get together, I might show up. I’m not weird though, I promise.

Is that an awkward “ha ha” because I’m creeping you out? Sorry. I’m just recovering from Father’s Day. It’s WAY harder than Mother’s Day and I do a better job at it than my husband. Don’t tell, okay?

NO! A haha because you’re funny 🙂

I love the pictures! I’m glad y’all had such a great time. Thanks for sharing!

looks like it was a trip to enjoy , how do you all stay so in shape eating all the tempting food .

It was so good to see you!!! I finally got home this past Friday and I’m still tired. Hope I get to see you next year!

Looks like a great trip!!! I hope to meet you next year at BlogHer Food in Austin!

The pictures tell clearly of the fun you girls had that day. Thanks for the recap.

what an amazing trip and with every recap I read, I am KICKING myself that I didn’t go. I would love to have met you (and everyone else in all your pics!) 🙂

This looks like such a fun trip! I wish I could have gone to the conference.

Ok, I don’t get the Escala thing. I’m kinda thinking it a 50 Shades…reference?

OMG, I had to keep from licking my screen while drooling over all the photos of the yummy treats you enjoyed! Glad you had such a wonderful time 🙂

Looks like you had so much fun! Thanks for sharing!

I’m just a wee little bit jealous of your trip. I’m not, like, sobbing about it or anything. That’d be weird. But, yeah, I’m a little sad I wasn’t there.

Was so great to see you again, Shelly! I have to admit that I did crack open one of those $8 bottles of water because I woke up Friday morning dying of thirst… *blush* Oh, and Escala, yes!!!