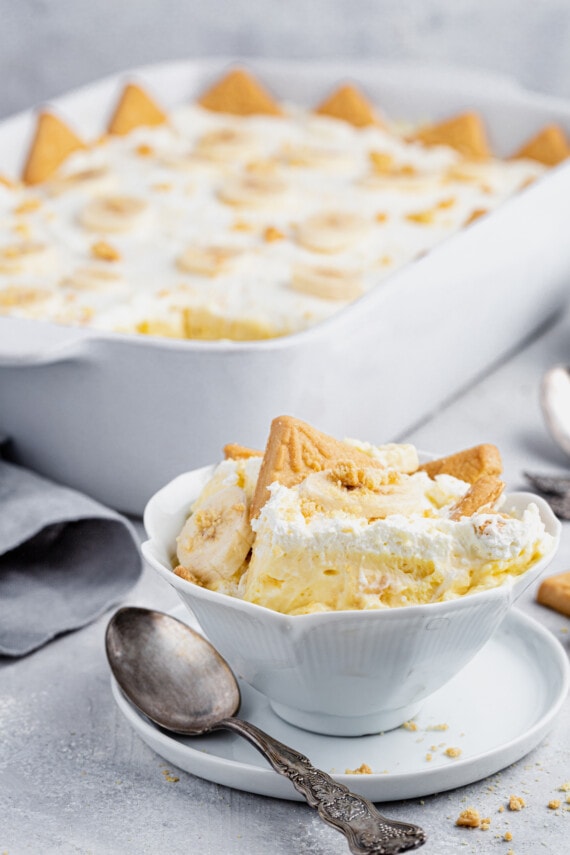 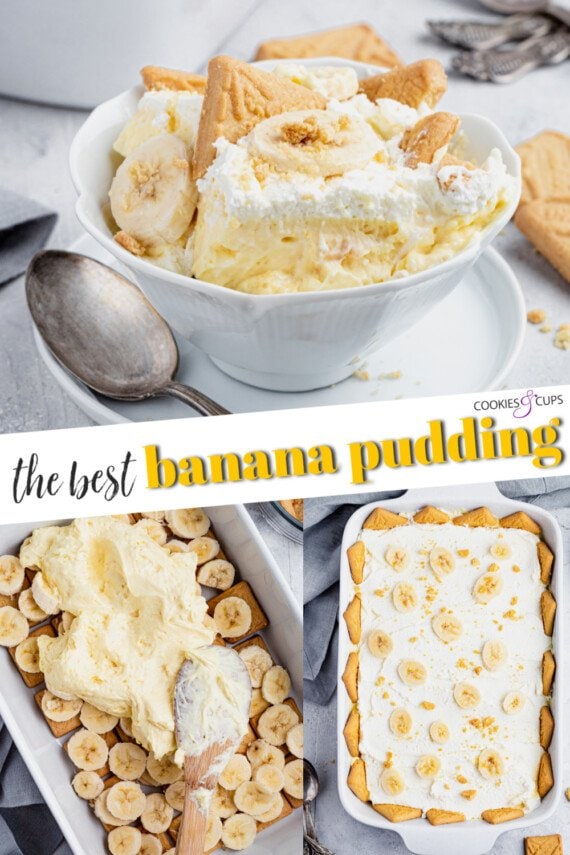 Okay, so I’ve been holding out on you…and I feel awful about it. This Banana Pudding recipe has been sitting in my grandmother’s recipe index card holder for years, and it’s FABULOUS.

Usually I’m not a huge fan of bananas unless they’re baked into a bread and surrounded by chocolate chips. But, my Grandma used to make Banana Pudding Pie when I was little, and I really loved it. Weird, huh?

Anyhow, this recipe is a version of the same banana pudding you probably grew up eating. Thick, creamy vanilla pudding is layered on top of fresh banana slices, which sit on top of sweet shortbread cookies. Then, a layer of Cool Whip and crushed cookies is added as a final touch – it’s a no bake dessert like no other!

I love making old fashioned treats, like this one, that remind me of my Gram and her recipes. Sometimes she would make this homemade banana pudding in a pie crust and serve it like pie, but a trifle dish would work just as well. More times than not, we had it in a simple 9×13 pan, like the way I made it today.

However you decide to make it, I hope you love this banana pudding as much as I do!

What Makes this Recipe So Good?

The Best Banana Pudding is unassuming, old fashioned, and completely perfect. How’s that for a sales pitch?

But, in case I haven’t convinced you yet, I’ve got a few more reasons as to why you should make this delicious banana pudding:

The ingredients for this banana pudding recipe are indulgent but simple. Here’s what you’ll need to gather up:

How Ripe Should the Bananas Be?

You want the bananas to be pretty ripe – they should be a deep yellow, and speckled with brown spots. Don’t pick bananas that are overripe because they’ll brown faster or turn mushy. Save those ones for banana muffins or bread!

How to Make Banana Pudding

Banana pudding can be broken down into three main layers: a layer of cookies, another of bananas, and one of pudding! Of course, if you’ve got any topping ideas, feel free to add them.

Here are the steps to constructing your homemade pudding:

Beat Cream Cheese and Condensed Milk: In the bowl of your stand mixer, fitted with the whisk attachment, mix the cream cheese and sweetened condensed milk together until smooth. Scrape the sides of the bowl as necessary, about 2-3 minutes on medium speed.

Add in the Dry Pudding Mix, Milk, and Vanilla: Begin mixing on low for 30 seconds, slowly turning up the speed until you’re on high speed. Mix this for 4-5 minutes until thickened and smooth, again scraping the sides of the bowl as necessary.

Add Cool Whip: Fold 4 ounces (half) of the Cool Whip, or whipped cream, into the pudding until combined.

Add More Cookies: Crumble any remaining cookies on top of the Cool Whip and/or place more cookies around the edge of the pan for decoration. Cover with cling wrap and chill for at least 4-6 hours.

How Do I Keep the Bananas From Turning Brown?

Prevent the banana slices from turning brown by squeezing some lemon juice on them. Coating them in citric acid will keep them looking nice and fresh. Just be careful not to go overboard so that you don’t change the flavor of the pudding.

Okay, we’re almost there! I know this has been a lot of information, but banana pudding is so worth the reading.

Here are some quick tips to skim through before you get started:

How to Store Banana Pudding

I like to store any leftover banana pudding in an airtight container in the fridge, for up to 3 days. After that, the cookies will probably become soggy.

You can serve this in any dish you prefer, like a trifle dish, individual dishes etc.

Want to try some more delicious pudding recipes? Check out these ones: 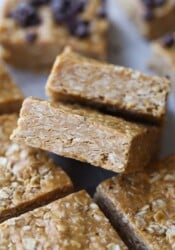