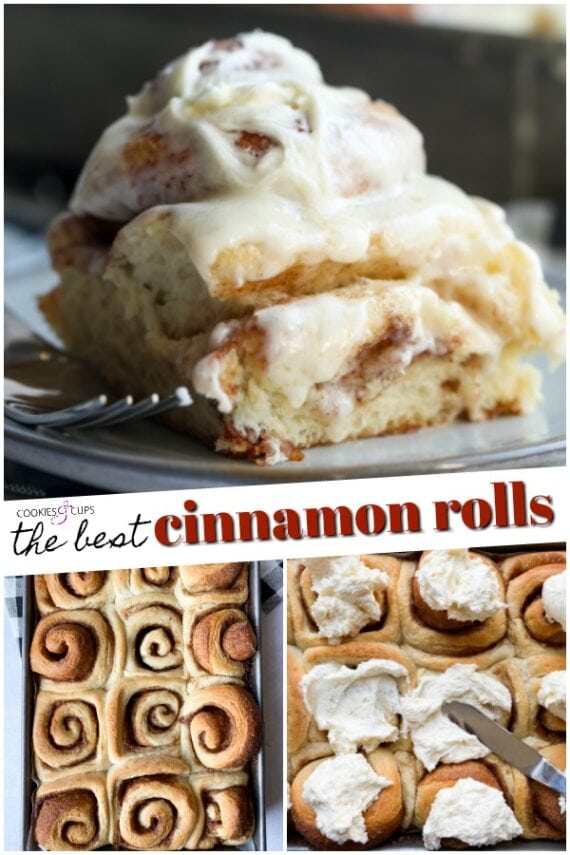 Today I’m sharing the BEST Cinnamon Roll Recipe EVER! These homemade cinnamon rolls are easy to make, with very little rise time thanks to a few time saving tricks! You’ll have gooey, soft, from-scratch cinnamon rolls prepped and baked in no time!

I have partnered with Fleischmann’s Yeast on today’s recipe. Thank you for continually supporting the brands that make this website possible.

Today’s recipe is one that you will want to bookmark, pin, print out, save for later, share on facebook and tweet about. It’s THE recipe for cinnamon rolls. It’s a pretty big claim, I know, but I fully stand behind it.

Cinnamon Rolls (or cinnamon buns) are one of those recipes that a lot of people might shy away from, opting to open a can, or head to the mall food court to get their fix. I would surmise this is because there is yeast involved. But, let’s just squash that idea. Yeast is just another ingredient, like sugar or flour. There is NO reason to tense up at its mention.

And the Cinnamon Rolls recipe I am sharing today uses Fleishmann’s® RapidRise™ Yeast which saves time and produces consistent, delicious results every time…I mean, with 150 years of experience, they know what they are doing!! Plus, nothing tastes better than homemade.

How To Make Cinnamon Rolls From Scratch

I am going to walk you through the simple steps. So let’s start with what you will need.

Using RapidRise™ Yeast in this recipe is great for a few reasons: You only need 1 (short) rise time and you don’t need to hydrate (or bloom) the yeast in water.

Waiting for dough to rise is sometimes a guessing game if you are new to yeast baking. But the instant yeast is great because the process happens much quicker! Your dough will double in just about an hour!

I want to hit on a few important details of making the dough, that always has helped me. I’ve written out full, detailed instructions in the recipe, but I wanted to include a few images so you could see every step along the way! Don’t get too hung up on making them look perfect, especially if this is your first time making them.

What Is In Your Cinnamon Roll Filling?

Beside pure love, cinnamon roll filling only consists of butter, sugar, and cinnamon! BUT that doesn’t mean you have to stop there. There are tons of options of goodies you can add to your buns if you want to get creative!

Where Do You Put Your Dough To Rise?

This used to always be a question I asked myself when I was new to yeast baking. But here are a few good tips:

This recipe can ABSOLUTELY be made in advance. It’s especially great for holidays, or for entertaining because you can do everything in advance!

Here’s What You Do…

Cover your cinnamon rolls in the pan with plastic wrap before they’ve risen and place the pan in the refrigerator to rise slowly overnight. This is a great method to use if you want to prep ahead! The next morning pull your pan out of the fridge and preheat your oven. Remove the plastic wrap and bake!

I REALLY want you to try this Cinnamon Roll Recipe. Nothing tastes better than baking from scratch, and I hope I’ve been able to give you the confidence to bake with yeast if you’ve never tried it before!

My Easy Bakery Style Cinnamon Rolls are the BEST! I use RapidRise™ Yeast which makes the process quick!

Store airtight at room temperature for up to 3 days.

You can also prepare the rolls overnight by completing steps 1-11, but instead of allowing the rolls to double in size in a warm place, cover and place in the refrigerator to rise overnight. 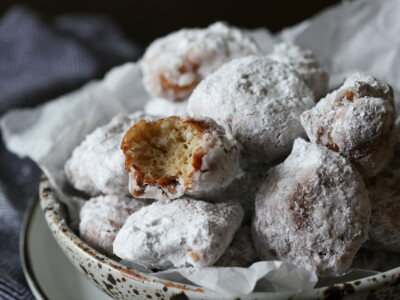 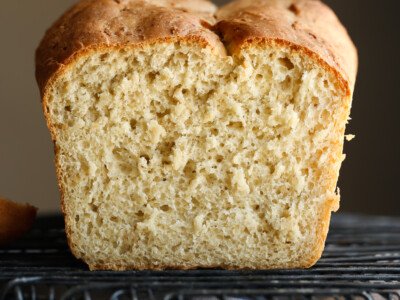 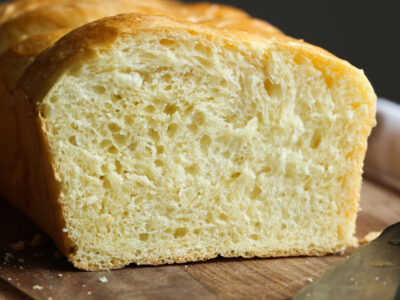 If you refrigerate overnight. Do you bake right away the next morning or do they need to sit out for 1-2 hours I’ve seen in other recipes?

You can bake from cold, or let it sit out to room temperature, it would just shave off a few minutes of bake time.

Hello Shelly! Your recipe calls for 2 packets of rapidrise yeast, each packet contains 2 & 1/4 tsp so that means I need a total of 4 & 1/2 tsp yeast? Thanks in advance for replying and keep safe!

I noticed some comments about freezing them, but can you explain what steps to take to freeze them before baking?

Yes, you can do this! I will add instructions to the post tips to help! Prep the cinnamon rolls up to step #11 in the recipe card, but don’t allow the dough to rise as stated. Cover the pan tightly with plastic wrap, and freeze for up to a month. The night before you’re ready to bake them, take them out of the freezer and allow them to thaw in the refrigerator overnight. The dough will rise once it’s thawed and then bake as stated!

Hi there! I followed the steps and used 5 cups of flour but the dough was kinda tough when done…and it didn’t really rise after the 10 min in the oven. What did I do wrong? Did I Mix on high too much?

The dough won’t rise after the initial 10 minute rest period. You allow it to rest for those 10 minutes to relax the gluten before forming them into the rolls and then rise 🙂 Since this recipe is written using rapid rise yeast you only need one rise time.
Also the dough shouldn’t seem tough, but it shouldn’t be sticky. If it’s dry you can add a tablespoon of water to the dough at a time until it is no longer dry.

These were gorgeous Shelly, my boys loved them. Made them without the frosting, but it was still so delicious. Have always wanted to try them, and now I did. Thank you Shelly.

So glad you enjoyed them!!

These were super delicious and a huge hit today! Thank you for such a great and easy to follow recipe!

This is the second year in a row I have made these on Xmas eve for Xmas morning, they are easy and super delicious!

I’ve always wanted to make cinnamon rolls from scratch (especially as in Australia we don’t have the ‘pre-made’ ones to easily bake) and after seeing this recipe decided to take the plunge.

It was so amazing and delicious! Everyone raved about how good they were. The rolls were soft and just melted in your mouth. Can’t wait to do them again!!

So glad you loved these!!

Cinnamon Rolls the next day will always be a little firmer than the day you bake them, but they shouldn’t be hard…did you store them airtight?

I’ve made these twice love them ! The only problem I have is they are hard the next day even after storing them like it says . Am I doing something wrong ?

Can you use active rise yeast instead?

Good morning,
What would be the method for freezing the rolls and then baking them at a later time?

Can these be frozen after baked and frosted?

Love these!! Can you freeze before baking?

Made these last night and baked them off this morning! Easy recipe…the dough was lovely to work with. Shared with two neighbors and my sister and BIL. Delicious! Next time am going to add some walnuts and swap out half of the butter in the frosting for cream cheese. Definitely a keeper!