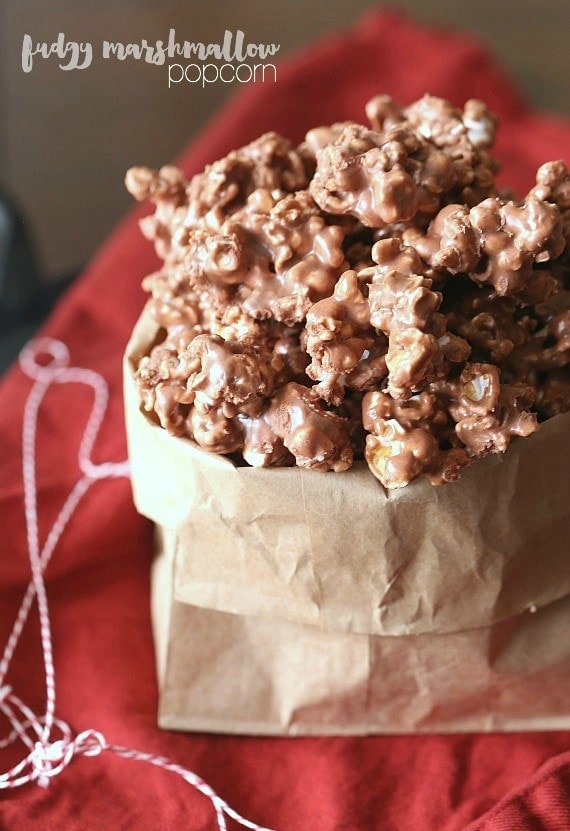 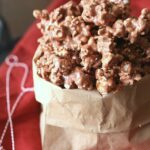 This sweet and chocolaty Fudgy Marshmallow Popcorn is air-popped popcorn coated in homemade fudge with chewy marshmallows everywhere. Prepare to be addicted!

Let’s just get this out of the way. This popcorn is ridiculous. Like really. It’s literally popcorn coated in fudge. There might seriously be something wrong with my brain.

Anyway I kinda thought it was time to get on back to my roots and serve you up some supremely trashy snack food. Because I have convinced myself that stuff like this and this is classy? I have no idea.

I will warn you though, this fudgy popcorn is one of those snacks that you will eat a handful of and think, “that was super good”… but then think, “that was also really strange…fudge and marshmallows and popcorn…” THEN you’ll be like, “did I REALLY like it? Let me have more just to make sure” and THENNN 35 handfuls later you’re like, “ok, I liked it and now there’s none left”.

Also, “I have a toothache.”

So basically what I’m saying is make it, you’ll like it.

How to Make This Chocolate Popcorn Recipe 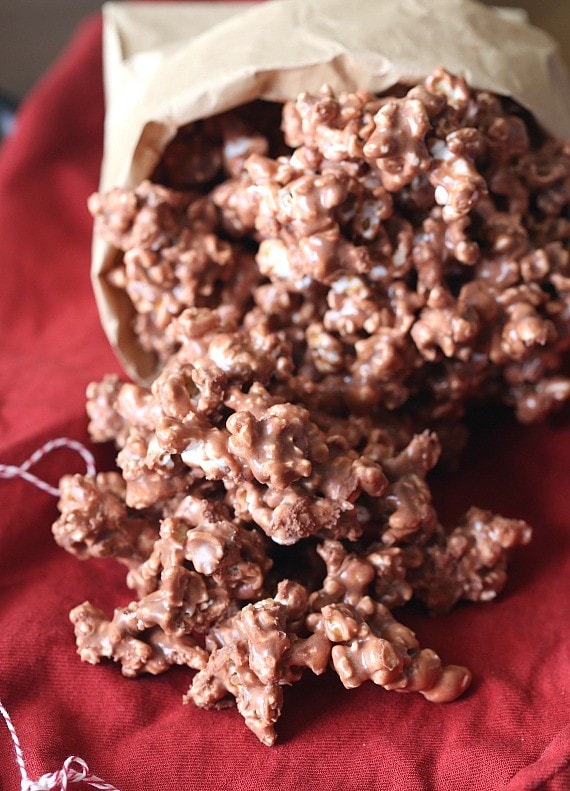 All you do is pop a big old bowl of popcorn… 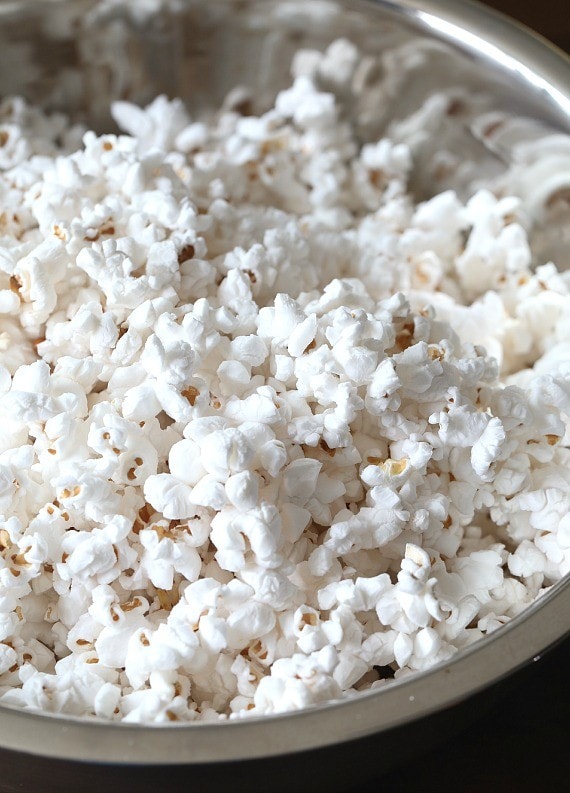 Boil together some evaporated milk, butter and sugar. Then add in some chocolate chips and marshmallow creme!

Pour it all over the popcorn… 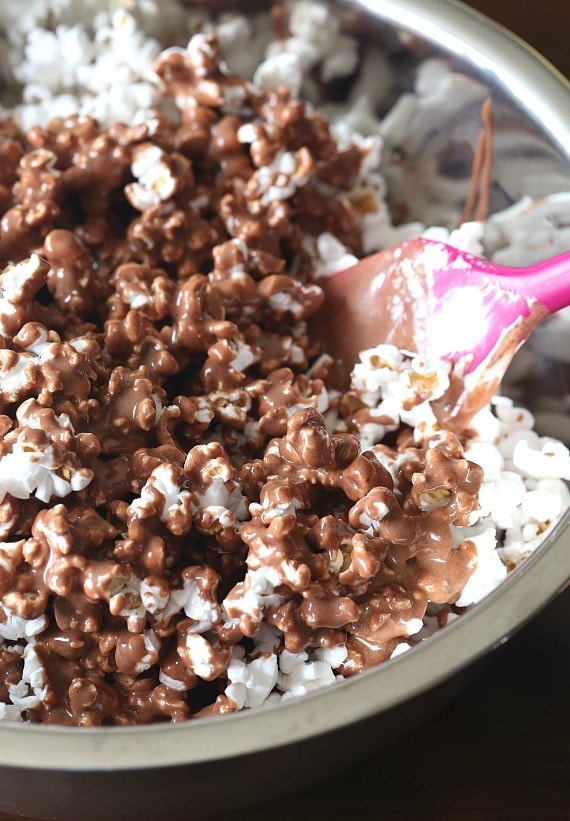 Stir it up, add some more mini marshmallows (if you want) and then stir it some more, so every last piece is coated in fudge. 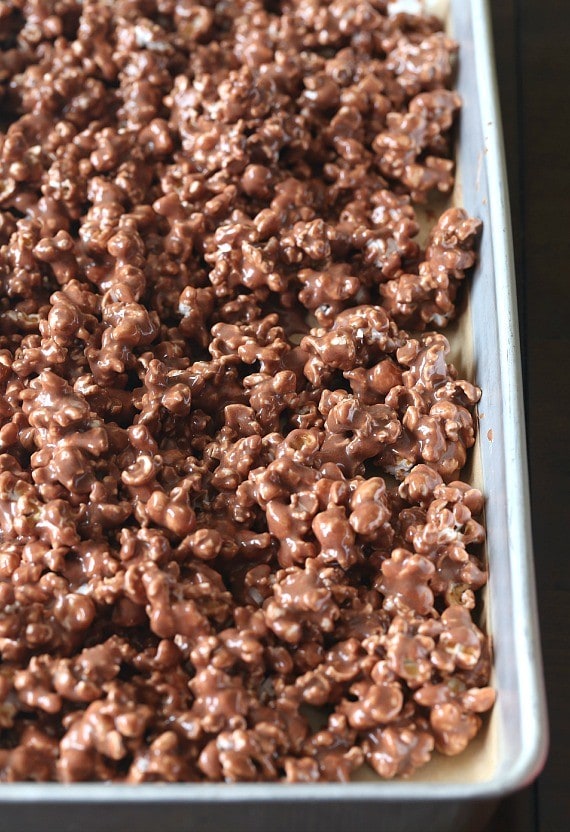 I mean, really. Look at that tray of fudgy popcorn.

Let it set up at room temperature, which takes about an hour-ish…

It will be sticky at first, but when it sets it’ll be dry to the touch so you can eat it without getting chocolate all over your hands… not that there’s anything wrong with that! 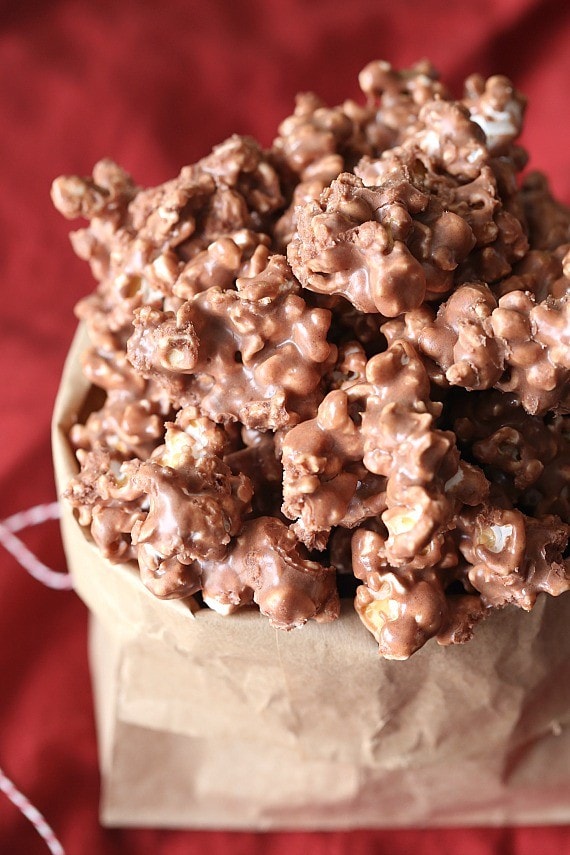 This sweet and chocolaty Fudgy Marshmallow Popcorn is air-popped popcorn coated in homemade fudge with chewy marshmallows everywhere. Prepare to be addicted! 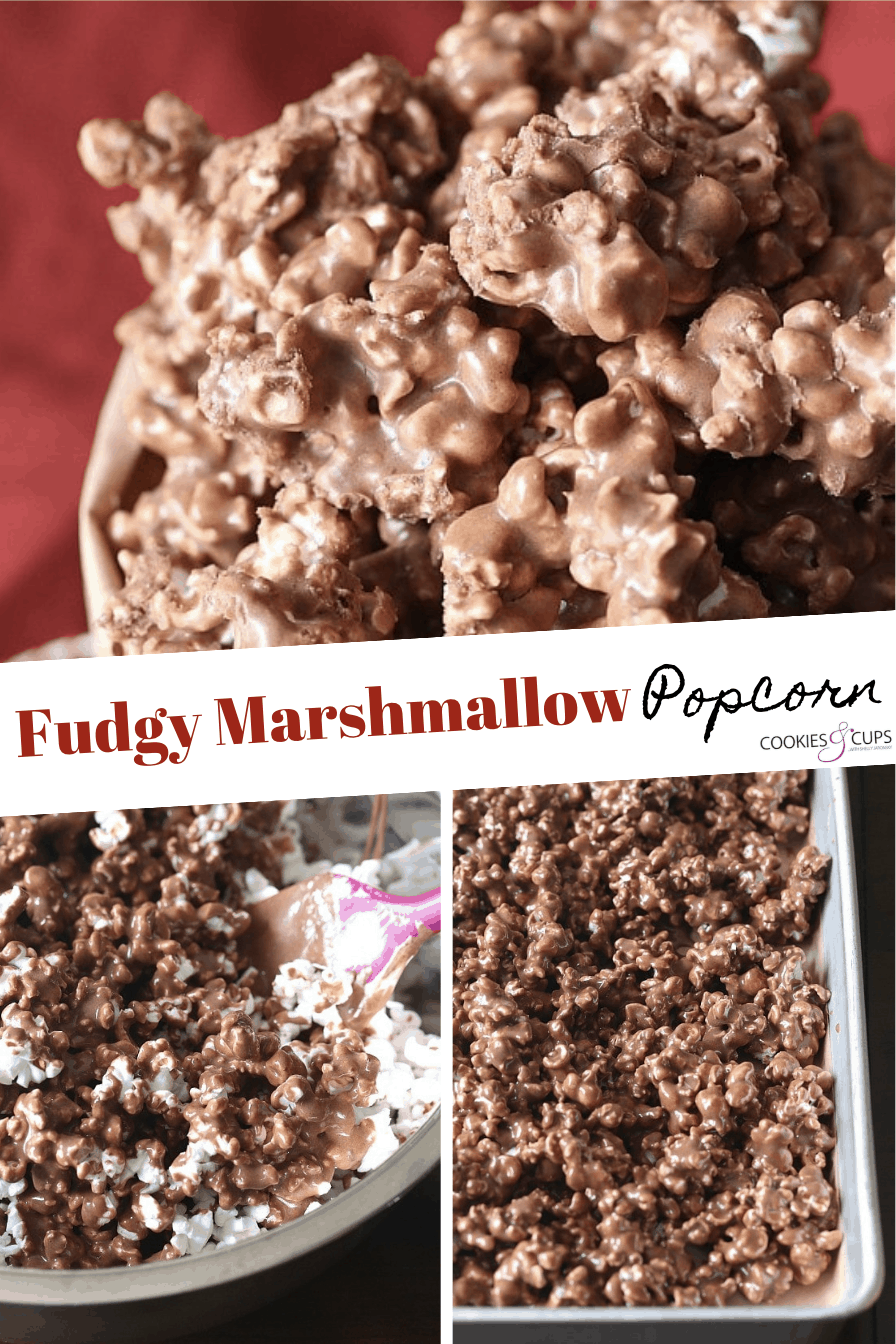 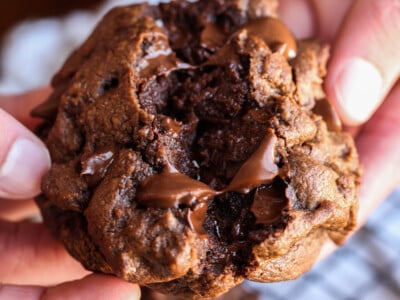 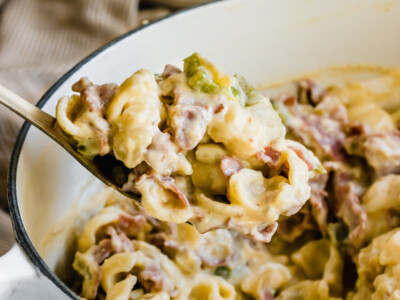 I made this with salted caramel puff corn. Oh my heck, so good and addicting.

I am really disappointed in this recipe. There is way too much fudge in ratio to the popcorn and the fudge turns the popcorn into an unpleasantly chewy mess.

Do you think sweetened condensed milk would work, or do I need to run to the store to buy evaporated?

About how many cups of popped popcorn is this do you think?

Hi Shelly! I was just wondering if you have any tricks to keep the popcorn crunchy after the chocolate mix has been poured on? I made this last night but the popcorn had a bit of a stale texture to it straight away. I popped the popcorn on the stove as I don’t have a popcorn maker, would that make much difference? Thanks!

This popcorn is kind of chewy.. there isn’t a real way to make it stay crispy unless you use a coated popcorn, like a caramel corn and coat that. Actually omg, caramel fudge popcorn. That might be the best idea ever!

Oh sweet lord! DO you think peanut butter or butterscotch chips will work? I think they miiiight and I’m in trouble!

0
Reply
Coco in the Kitchen

We’ve both got marshmallows on the brain! I just did a post about torched marshmallow frosting and now all I can think about is this s’mores popcorn of yours!

I don’t prefer popcorn.. but thinking about bugles….yummmmy…or teddy grahams.

This looks amazingly delicious and I can’t wait to make it!! Looks like a great rainy Saturday snack while glued in front of Netflix.

This looks amazing! I was already planning on making fudge today. Why not add popcorn???!!! But you don’t think it will last longer than two days (my step-dad has a HUGE sweet tooth and I won’t see him until Saturday).

So decadent! This is a beautiful thimg!

So this is kinda genius. I have no doubt that I’ll love it, but I better try 58 handfuls just to be sure.

Wow this popcorn looks amazing! Love that salty and sweet combo from the popcorn, chocolate and marshmallow cream! Will have to give this a try!