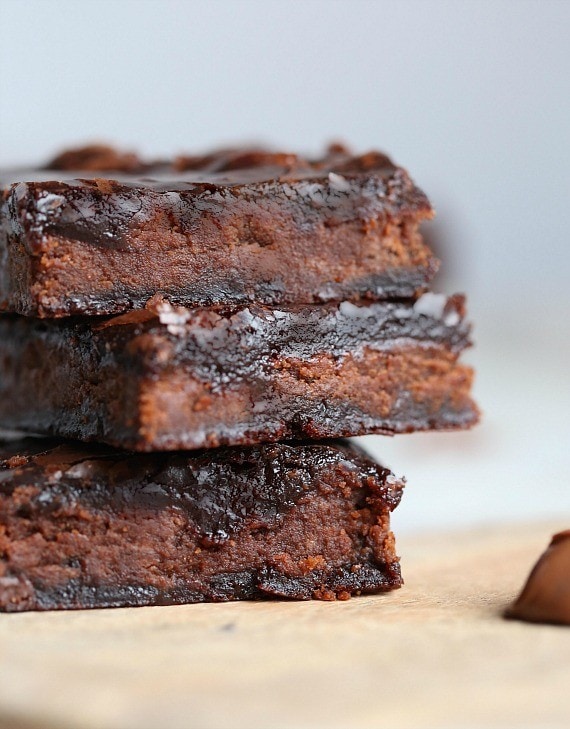 My boys love their Nutella. Generally it’s with a spoon right out of the jar, but I try my best to find creative ways to limit that! I’ve made Nutella Hot Fudge Sauce, I’ve wrapped it in phyllo dough and baked crispy cigars, I’ve even made whole layer cakes with Nutella. (Click HERE for all my Nutella recipes).

Today, though I’m going back to basics(ish) by baking Nutella right into a brownie. Actually I’ve created a Nutella Truffle mixture and layered that inside a brownie. So you’re basically eating a brownie and a truffle all at once. Yes.

The truffle layer stays pretty intact during the baking process, so you get a true thick layer of Nutella right in the center.

You can absolutely use a scratch brownie recipe in this recipe, if you prefer. I just used a boxed brownie mix, because I had one in my pantry and thought it would simply the whole process. I did, however, add some chocolate chunks to my brownie batter to amp it WAY up.

The filling is just Nutella, powdered sugar and a little milk. It will be VERY thick.

To assemble the brownies just spread half of the batter into a prepared pan.

Using your hands portion out some of the nutella filling and flatten it. Layer this on top of the batter. It can (and will) overlap, which is 100% alright alright alright.

Top the Nutella filling with the remaining batter.

Bake the brownies up and they will be tré gorgeous.

Allow them to cool completely before cutting. Or not. Whatever.

These Nutella brownies are ultra chocolatey and you love every bite.