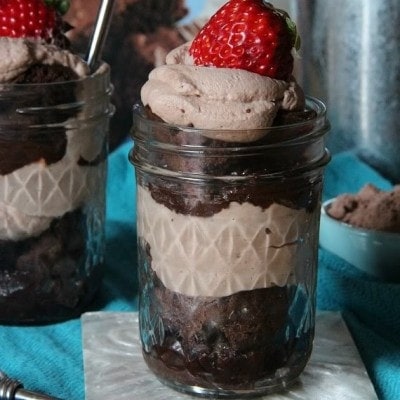 That brings us to “live”.
Inspiration in the form of Brownie Batter.

So I was talking to Kristan and we decided when inspiration hits, why not hit a grand slam?
Inspiration found in a bowl with a spoon, getting knocked out of the park with a baseball bat.
What?
Clearly all this talk of raw batter has made my head loony.

Back to grand slams…we decided to take some brownie batter and do it lots of ways. Like a whole week dedicated to brownie batter on my site and hers.
It’s a two-fer.
Prepare to be slammed.

Say it with me…Brownie Batter Whipped Creammmm.
It’s a whole-lotta brownie in one jar.

How to Make Brownie Batter Parfaits:

Start by making some brownies. Or buying them. Either works.
Break them up into pieces…

Then you’ll need to make your Brownie Batter Whipped Cream

You’ll have to tie your hands behind your back to keep from eating it straight from the bowl.  That’s not hyperbole.

All you do is pour some dry brownie mix into some heavy cream and whip away.
That’s it.  Try it, I swear to ya.

THEN, make some brownie batter…but leave out those pesky eggs.

No need for them here.
Just brownie mix, oil and water…
Now assemble.

This is some serious chocolate.

Now, are ready for a full week of this stuff?

It’s gonna be off the chizzle.

I used 2 tbsp of batter, 1/4 cup brownie pieces and 1/4 cup whipped cream and repeated this one time in an 8 oz jar.