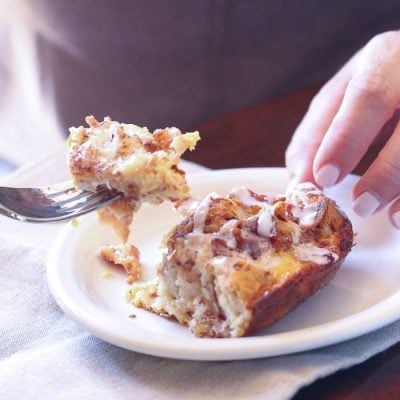 This easy Cinnamon Roll Breakfast Bake recipe is the best for a weekend breakfast, holiday or brunch! It’s great for feeding a crowd and the salty/sweet combination of cinnamon rolls and bacon will be your new breakfast favorite!

I love a good breakfast casserole. I don’t make them very often…and I have no idea why. They’re way easier than making waffles in my opinion…and this one happens to include bacon AND icing, so there’s that. You just kind of dump everything in a pan and bake it up!

They sometimes do require a little “ahead” prep, but in this case that only means frying bacon…

ORRRR buy the pre-cooked. Absolutely take the shortcut if you want! I actually fry my bacon on my cast iron skillet on the grill outside. I love the smell of bacon, but don’t love the lingering odor it gives my house for the next 2 days after frying…SO the grill solves my problem!

And did I mention there’s icing involved? Yeah that…

Place all your cinnamon roll pieces in a 9×13 pan evenly, along with some melted butter.

Now to the bacon…I prefer my bacon crispy for this recipe (and always). You will need to crumble it up, so crispy bacon works best.

Sprinkle it on top…

Also, you can add nuts at this point if you want…Sometimes I add them, sometimes I don’t.

Then mix up some eggs, milk and vanilla and pour that all on top!

Then get your icing ready! I heat mine in the microwave for about 10-15 seconds, just enough to make it pour-able…

The casserole is soft, rich and delicious, with the perfect salty/sweet balance!

This easy Cinnamon Roll Breakfast Bake recipe is the best for a weekend breakfast, holiday or brunch! It’s great for feeding a crowd and the salty/sweet combination of cinnamon rolls and bacon will be your new breakfast favorite! 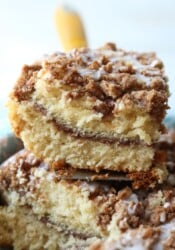 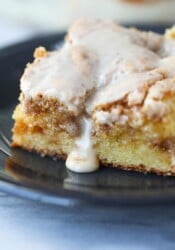 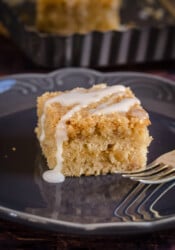 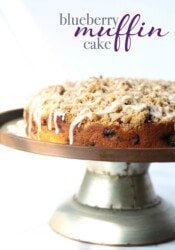