I mean, I know EVERYONE thinks their ideas are the best…but mine actually, really are.

Like I had the idea for the Swiffer, way before the Swiffer ever happened.  I could be a bazillionaire right now, counting my golden coins, but I am not.  I just thought about the idea and then BOOM the Swiffer was invented and I was super mad for months about my lost millions.

THEN I had the idea to make flavor packages to put in your individual bottles of water.  Genius, right? Why yes, it IS genius, because now you can buy them in every supermarket across the land.  But I did not make a dime.

I guess if you have super great ideas but only tell your husband or your best friend it doesn’t really count as a great idea.  You actually have to do more than just be an idea maker to make bazillions of dollars.

So here I am today, telling all you fine people of my latest great idea.

And it’s maybe my most awesome idea ever…you know, since George Foreman stole my idea for a indoor grilling system….geez.

So, here it is.  I am unveiling it to the world…and I am totally ready to count my golden coins.

It’s a real thing as of RIGHT NOW!

Told you I was a good idea person.

So simple and so ridiculously incredible…A Reese’s Cup sandwiched between 2 Oreos.

My friend literally said, “They’re like a dream come true.”

Truer words have never been spoken.

You’ll need full sized Reese’s cups, Oreos of any flavor…I used Double Stuff, you should too, and melted chocolate for dipping.

** If you’re feeling crazy buy some Golden Oreos (Double Stuff) and some white chocolate to dip too…I did and they were delicious!

Now twist your Oreos so the filling stays on one side.  Reserve the other (nekked) side for eating or garnish 🙂

You can make as many as you want, so I’m not going to give you amounts…just keep twisting until you have enough Oreos to sandwich the amount of Reese’s you want.

Now sandwich your Reese’s in between your filling sided Oreos and give them a gentle squeeze so the filling sticks  to the Reese’s Cup.

You can garnish with drizzles or some crushed Oreos.

I told you I had good ideas.

Check out this awesomeness…

Now, excuse me…I think I hear golden coins dropping from the sky.  I need to get counting! 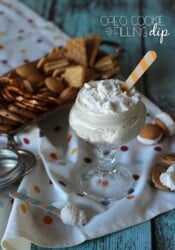 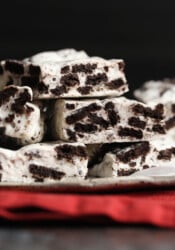 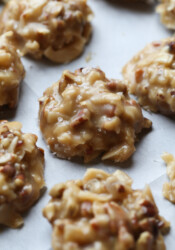