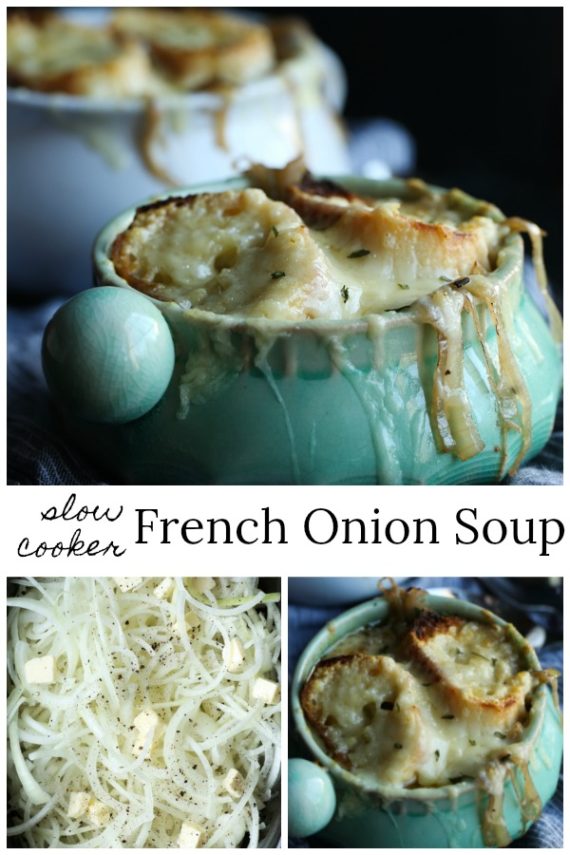 French Onion Soup is the winter soup of choice in our house. This classic bistro dish is made with beef broth and cooked with herbs, wine, butter, and perfectly browned onions in a slow cooker. Top everything off with a crusty bread raft and a layer of melted Gruyere cheese, and you won’t be able to get enough of this easy onion soup!

French Onion Soup reigns supreme as the winter soup of choice in our house. My Chicken Noodle Soup is a contending favorite, but it’s hard to beat the ease and incredible flavor of a cozy onion soup. And as the weather turns chilly, sometimes a warm bowl of this slow cooker soup and a blanket is the best way to go (no judgement if said blanket accompanies you to the dinner table).

French onion soup is a classic bistro soup made with beef broth that’s enriched with herbs, wine, butter and, of course, perfectly browned onions. It really has an amazing depth of flavor if done slowly! Not to mention the crusty bread raft topped with a layer of melted Gruyere cheese!

Here is the foolproof recipe for my best French onion soup, made in a Crock-Pot® for extra convenience.

Flavor is what we’re after with this slow cooker onion soup. The below ingredients all come together so nicely after a few hours in the Crock-Pot®.

How to Make French Onion Soup

For this recipe, I use my Crock-Pot® since it’s such a great option for busy days, or for entertaining. Plus, the flavors still come together so beautifully when cooked over low and slow heat. Here’s how to make easy French onion soup in a slow cooker:

Cook the Onions: First, combine the onions with butter in your slow cooker. Season with salt and pepper and then cook the onions on high heat to tenderize them.

Combine the Ingredients: Next you’ll add in the broth, wine, bay leaf, thyme, bouillon, and Worcestershire. Leave the soup contents to continue cooking on high until the onions are cooked down.

Garnish and Serve: Ladle the soup into oven-safe bowls (I like to use ramekins). You’ll top each bowl with 2 slices of crusty bread and a generous pile of grated Gruyere cheese, before placing the soups under the broiler until the cheese is bubbling and melted.

If you’d prefer to make French onion soup on the stove, see my stovetop instructions in the notes section of the recipe card.

The Best Cheeses for Onion Soup

Purists will insist that when it comes to French onion soup, it’s Gruyere cheese or bust! And I’m mostly in agreement. Gruyere cheese is smooth and melty, rich in flavor, and a match made in heaven with the broth and caramelized onions. It truly is what keeps this classic soup true to its bistro roots.

That being said, I also feel that nothing should stand in the way of enjoying this delicious French onion soup! If you can’t get your hands on Gruyere, here are some other cheese options for French onion soup:

What Kind Of Bread Should I Use?

A good, crusty bread is best, like French bread or Sourdough. The edges will crisp up nicely under the broiler and the bread is sturdy enough to soak up the soup without becoming mushy too quickly.

Because of its hearty, rich flavors, I love to serve French onion soup next to a garden salad or steamed fresh veggies for contrast. This onion soup also makes a great starter for special occasions like Thanksgiving and Christmas!

For something with a little more substance, onion soup pairs nicely with Crockpot Mashed Potatoes, Garlic Knots, or Garlicky Mushrooms.

You can also go all out and enjoy French onion soup alongside a Broccoli Cheese Casserole or Cheesy Baked Mashed Potatoes. Cheese lovers, rejoice!

How to Store and Reheat Leftovers

I’ll put it out there – French onion soup is almost even better a day or two later, when all the flavors have had the chance to really meld together. Allow the soup to cool completely and then store leftover soup airtight in the fridge, where it will keep for up to 3 days.

Can I Freeze Extras?

Like most soups, French onion soup freezes extremely well. Make sure you freeze any leftovers without the bread and cheese, and store the soup in a freezer safe container. French onion soup will keep frozen for up to 3 months, and can be thawed overnight and then reheated on the stovetop or in the microwave.

Looking for more hearty soup recipes for the slow cooker or stovetop? Try these:

The best recipe for cozy, classic French Onion Soup made easily in a slow cooker. A flavorful broth and caramelized onions, topped with bread and melted Gruyere cheese. Perfect for keeping warm this winter!

Stove Top Instructions: In a large Dutch Oven over medium heat, melt the butter and saute the onions for 10-12 minutes, or until they are golden and soft. Season with salt and pepper. Add in the broth, wine, bay leaf, thyme, bouillon, and Worcestershire. Stir to combine. Bring to a boil and reduce heat to a simmer. Cook for 1 hour uncovered, stirring occasionally. Follow steps 4 & 5 in recipe to serve. 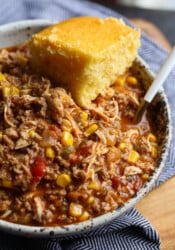 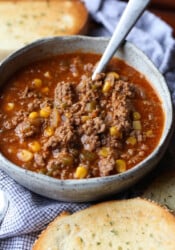 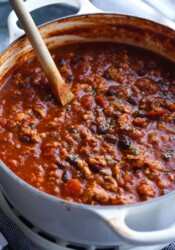 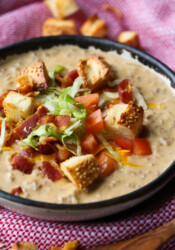