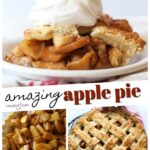 This Is My Favorite Apple Pie Recipe EVER!

Can you even believe that I have been blogging for almost 11 years and I have never shared my favorite apple pie recipe with you? It’s pretty rude if you ask me! I guess it’s just one of those recipes that (in my mind) flies under the radar, or I just assume that everyone already HAS an apple pie recipe, OR that it’s just kind of boring.

But Apple Pie is CLASSIC, not boring! AND you might have an apple pie recipe, but you don’t have MY apple pie recipe…which I hope we’ve built a level of trust over these past 11 years.

And let me tee this up for you…my pie recipe is easy to make, loaded with apples, AND my secret “touch” is that I caramelize the apples before baking…which sounds like a whole thing, but it’s incredibly easy, and FAST!

So if you haven’t checked out my recipe for All Butter Pie Crust, hop over and get that made, because I will say that there isn’t much better than Homemade Apple Pie on a crust you made with your own two hands.

How To Make The BEST Apple Pie!

Here’s the thing…I actually don’t love making pie. I know, I know, I talk about how EASY it is, how SIMPLE, how QUICK…but it just isn’t my first love in the kitchen. But I will say, that every time I make a pie, I always think…how EASY, how QUICK, how SIMPLE! So I am planning on making more pie. My jeans aren’t happy, but they never are.

How To Make Easy Apple Filling:

The key to apple pie is the filling. I mean duh, right! BUT the thing about apple pie filling is since it’s kinda-sorta the most important part, it can make or break your pie! If it’s too watery, or liquidy it’s not good, if it’s too dry, it’s also not ideal. Or if it’s lacking flavor that’s probably the WORST. So I’ve created a very simple filling recipe that is packed with as much flavor as possible with only 4 ingredients. It’s kind of magic. Here’s what you’ll need:

Do You Have To Cook The Apples For Apple Pie Filling?

But, no, you don’t HAVE to cook the apples. There are plenty of apple pie recipes that call for adding raw apples right into the crust, although with those recipes you will need to use a bit of flour to help thicken up the juices the apples make while they’re baking. Caramelizing them prior to adding them into the crust omits this step.

How To Make Your Apple Pie Pretty

Here’s the deal, don’t stress about making your pie “pretty”. Unless you’re entering a pie contest, rustic is ALWAYS best! Here are two easy ways to do a top crust for your apple pie:

Roll out dough for your top crust into a circle that will fit over the center of your pie pan.

Gently lift the dough and lay it on top of your filled pie crust. Using the tines of a fork, gently press the crust down onto the pan’s rim all the way around. Cut a few slits into the dough to create vents that will allow steam to escape as your apple pie bakes.

This simple double crust method is usually the way I go! It’s the easiest way to add a top crust, and once you slice your pie it doesn’t matter what the top crust looked like anyway. I just think that once you top your slice with a scoop of melty vanilla ice cream it won’t make a difference what’s underneath!

A lattice crust, like I pictured above is about as fancy as I get. I’ve seen all those braided crusts, with fancy pie decorations and gorgeous, crimped edges. That’s just not not how I do pie. Not that there’s anything wrong with that, I just don’t have the patience. I give it up to those of you who love pie art!

To make a lattice top for your apple pie, roll out your dough same as with a double layer crust. Cut the dough into even strips about 1/2-inch to 3/4-inch wide using a sharp knife or pastry/pizza wheel.

Lay several strips down across the top of your pie. To create the woven effect, fold back every other strip of dough, then lay another strip perpendicular to the strips in that first layer you put down. Unfold the folded strips over the perpendicular strip. Repeat the process until you have a cross hatch pattern for your entire top crust.

Love Apples But Not Pie? Try These Other Amazing Apple Desserts!

Roll out bottom pie crust: Roll one pie crust out on a floured surface to 1/8- inch thick. Transfer the dough into a 9- inch pie plate and press gently to fit. Cut the excess dough hanging over the edges, leaving about 1- inch. Crimp the edges using your fingers around the edge of the pie plate. Refrigerate the dough.

Combine apples and cinnamon sugar. Place the sliced apples in a large bowl. Set aside. In a small bowl combine the granulated sugar and cinnamon. Sprinkle this on top of the apples, tossing to coat.

Cook apple pie filling: Heat a large skillet over medium-high heat. Melt half of the butter in the pan. Pour half of the apples into the hot skillet and fry for 6-7 minutes until they are slightly softened and caramelized at the edges. Remove the apples and sauce created from the skillet onto a large baking sheet to cool completely. Repeat with remaining butter and apples.

Add apples to crust. When the apples are cooled, remove the pie crust from the refrigerator and pour the apples into the crust.

Roll out the remaining pie dough on a lightly floured surface to 1/8- inch thick. Place the pie dough on top of the apples, cutting the excess dough at the edge. Crimp the pie crust together with the bottom crust. If necessary, lightly wet the bottom crust with a little water to help stick together.

Make 4 slices in the top of the dough to vent steam to escape while baking. Or if you prefer create a lattice crust.  Whisk together the egg and the water. Lightly brush the egg mixture on top of the pie dough. You won’t use it all. Sprinkle with turbinado sugar, if desired.

Bake for 45-50 minutes until golden. If the pie crust is browning too much, use a pie shield or foil to prevent it from burning. Allow your pie to cool at least 1 hour before slicing.

Store airtight at room temperature for up to 2 days, or in the refrigerator for up to 5 days.

If you like to do a lattice top crust as pictured, follow all the steps as written, but after you roll out the top dough, slice it into 1- inch strips using a paring knife, or a pizza cutter. Place the strips on top one at a time and weave them in and out of each other. Crimp the edges as stated, and brush with the egg wash. 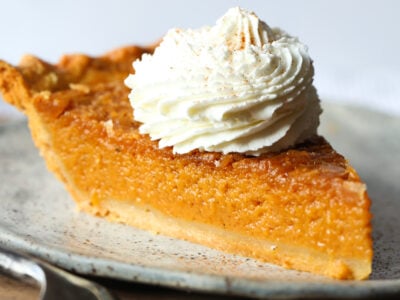 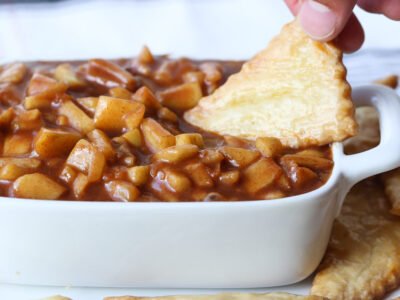 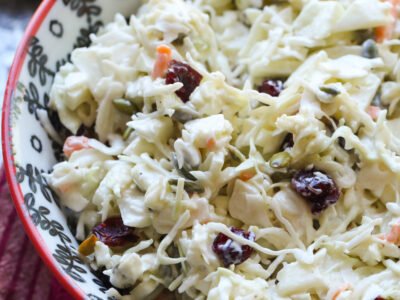 Sounds awesome but who cuts a 9″ pie into 10 pieces? 6 or 8, yes but 10? I plan to bake this with my gala apples. Thought about a crisp for the topping but how can you go wrong with carmelized apple pie

A Covid-19 lockdown win! Kids (11yo girl, and a just 9yo boy) have made your pie crust and pies. Second one in three days. First was the pecan nut pie, now your apple pie. We’re going to be rolling out of this lockdown with plenty of winning baking skills! They’re delicious!!

This makes me so happy!!! Your kids are superstars!!

This recipe looks wonderful. My granddaughter has requested apple pie for her birthday and I’m going to use this. Have you ever froze the filling to use for later?

You could definitely do that!

This sounds wonderhul! Do you use a lower baking temp of 350 because apples are partially cooked? Most other recipes bake at higher temp. Thank you!
Michele

Sounds wonderful……..Baking temp would help though.

very yummy and tasty. Love the Design part to make it cool.

Hi.. I can’t seem to find the pastry recipe. Please inbox me. Dying to try this.
Valbolton8@gmail.com
Thank you.

Here’s the link to the pie crust! https://cookiesandcups.com/pie-crust-recipe/

Yum! This sounds amazing! Can’t wait to make it! ?