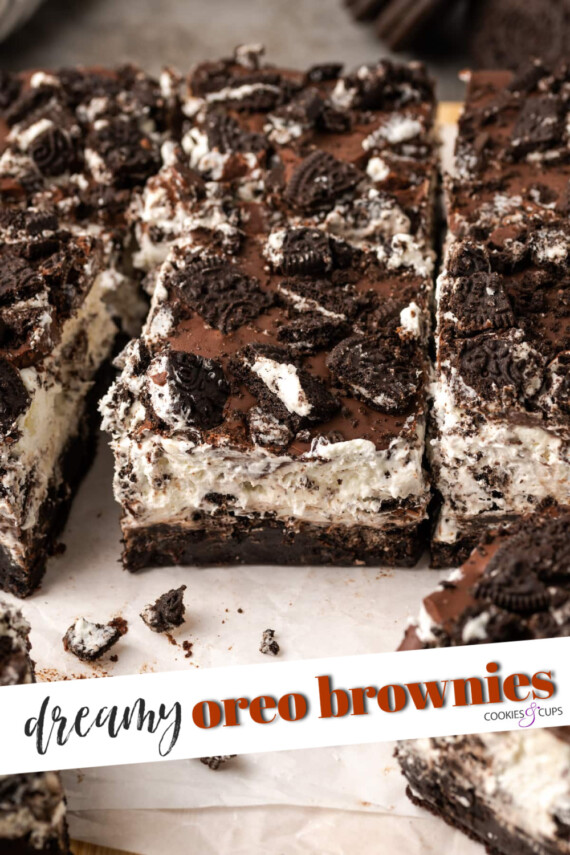 Dreamy Oreo Brownies are a delicious brownie recipe you need to try! These are made from layers of fudgy chocolate brownies and fluffy whipped cream cheese mousse, with plenty of chopped Oreo cookies scattered throughout.

If you love this easy brownie recipe, check out my Bombshell Oreo Brownies!

Oreo lovers, I have the ULTIMATE Oreo brownies for you to try. I know that’s a big claim, seeing as we’re mildly obsessed with Oreos around here. Take my Bombshell Oreo Brownies, Potluck Oreo Bars, and Triple Chocolate Oreo Bars as just a few examples of the madness.

This is an easy brownie recipe that begins with a boxed brownie mix and turns into irresistibly fudgy Oreo chocolate brownies topped with a thick layer of whipped cookies n’ cream cheese mousse.

Every inch of these easy brownies is loaded with Oreos, from the fudgy brownie batter, all the way up through the creamy frosting, to the garnish of cookies on top. One bite and the chocolate and cream cheese mousse melts in your mouth, while the brownies and cookie chunks serve up all sorts of tasty, chewy crunch. It’s truly an experience.

Below is a short round-up of the ingredients you’ll need to make these fabulous Oreo brownies. Be sure to check the recipe card further down for the full amounts and recipe details!

Can I Use Homemade Brownies Instead of Boxed?

Absolutely. A boxed brownie mix makes this recipe super fuss-free, but if you’d prefer to make your brownie base from scratch, go right ahead! My Perfect Fudgy Brownies are a good option for this. Just stir the chopped Oreos into the batter and bake, the same as you would here, then proceed with the recipe as usual.

How to Make Oreo Brownies

Let’s make some cookies n’ cream magic, friends! These Oreo brownies are crazy-easy to whip up in just a few quick steps. Here’s how to make them:

What’s the secret to the perfect fudgy Oreo brownie? There’s not much to it! Below are some helpful tips when making these easy (almost) homemade brownies:

Get creative and try these easy ways to customize your Oreo brownies:

How to Store Oreo Brownies

Store your Oreo brownies refrigerated airtight for up to 1 week.

Can I Freeze These Brownies?

Yes! Once the brownies are chilled and cut into squares, you can store them together in an airtight container (I recommend sticking to a single layer), or wrap the brownies individually to freeze. They’ll stay fresh for up to 2 months.

Thaw the frozen Oreo brownies in the fridge before serving.

Easy Oreo Brownies made from dreamy layers of fudgy chocolate brownies and thick cream cheese frosting, with plenty of Oreo cookies scattered throughout!

*You can bake your own brownies from scratch if you prefer. Try my Perfect Fudgy Brownies.

Store these brownies airtight in the refrigerator for up to 5 days.