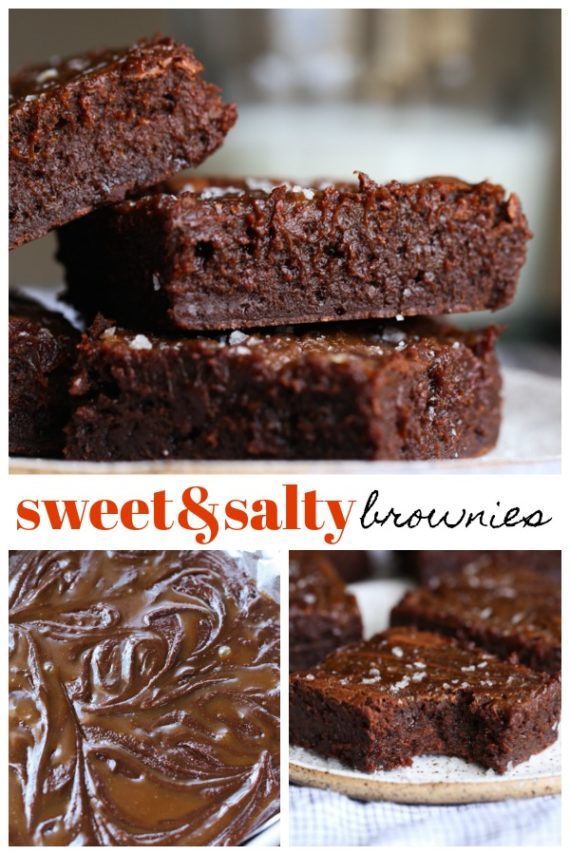 These Sweet and Salty Brownies will finally end your search for the ultimate fudgy brownie recipe. A simple homemade salted caramel is baked right into the brownies, leaving them extra rich and decadent. A sprinkle of flaked sea salt on top is the perfect garnish!

I have made a LOT of brownie recipes here on my site. A.Lot. My Fudgy Brownies Recipe is the classic, and my Kid’s Favorite Brownies are ALWAYS a hit. But of course I am ALWAYS up for a new brownie. I mean, it’s kind of my job. And my favorite type of brownie is a thick, dense, fudgy, stick-to-your-teeth situation. And today we are going full send.  Sweet and Salty Brownies are everything you cold possibly want a brownie recipe to be.

The secret to this brownie recipe is the easy caramel sauce that you bake right into the brownies. It’s almost undetectable, but gives them SO much flavor and texture. You won’t get a chewy caramel layer, it LITERALLY bakes right into the batter…leaving a deliciously gooey, brownie, with some salty bits, and caramelly bits, but will leave people who aren’t in the know asking, what IS that?

My mouth is literally watering thinking about them. So let’s stop talking, and get to it! 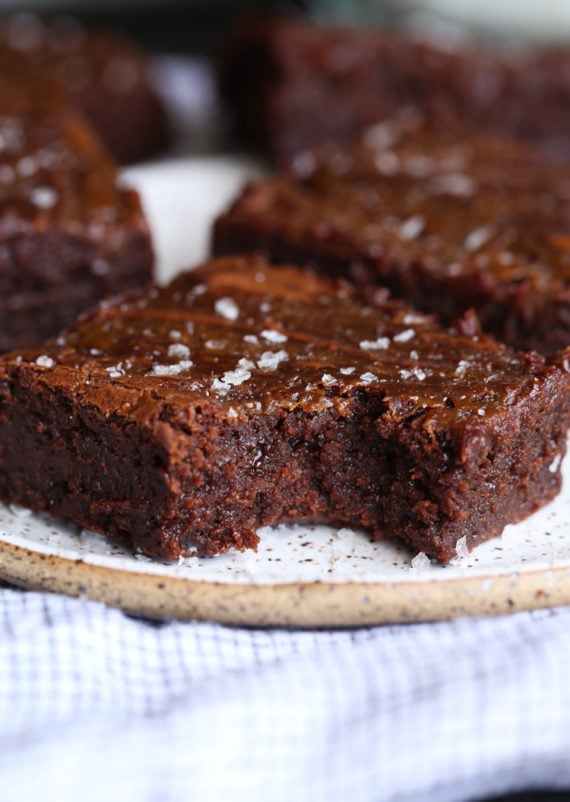 How to Make Sweet and Salty Brownies

Ok, let’s first, let’s get this out of the way…these are “Sunday” Brownies. They need a minute to prepare.They aren’t a one bowl brownie recipe. However, they are worth the extra few minutes that they take. SO worth it. AND they are actually better the next day, so go ahead and make them a day in advance, and let the magic happen overnight as all the flavors meld together.

Don’t let me scare you though…this is NOT a difficult brownie recipe. It will just a few extra minutes longer than, say, opening up a boxed mix and getting down to business. 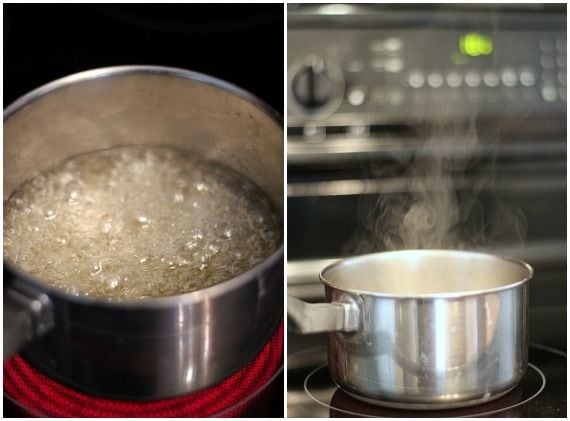 Do you Have to Make the Caramel From Scratch?

Like I said above, yes. Go the extra step and do this. The caramel recipe here is perfectly suited to be baked inside the brownie batter, making it flavorful and moist, but not chewy like a typical caramel would be once it cools. If you don’t know, you might not even be able to identify that there is caramel baked in. It’s a really special recipe.

The secret addition of sour cream in the caramel adds richness and smoothness, without being detectable to the taste.

The caramel is another step that you can do ahead of time. You want the caramel to be cooled, but not cold, so if you do make this ahead, bring it back up to warm-room temperature before adding it to the batter. 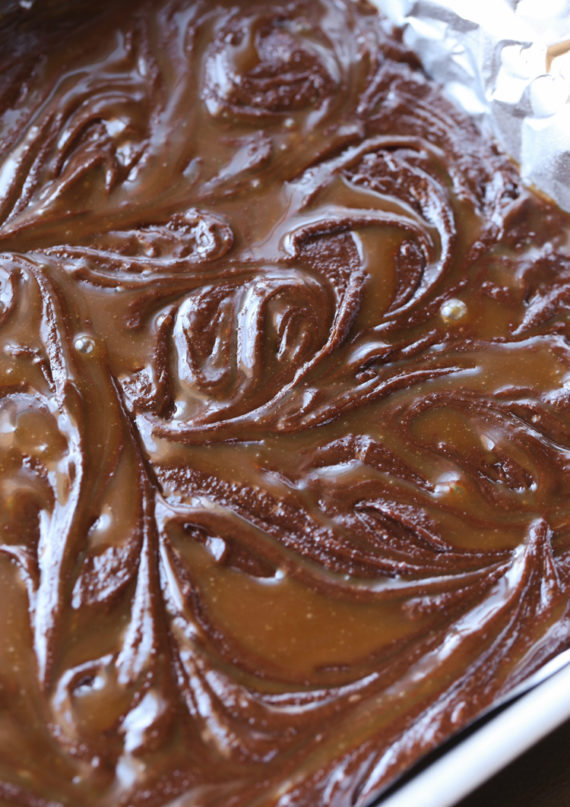 Like I said above, you might not even know that there is caramel baked into the brownies. The richness and sweetness it adds is by far what makes these brownies so special.

*NOTE* In the brownies pictures, I used all the caramel sauce, inside and on top of the batter before baking. See more details in the full recipe card. 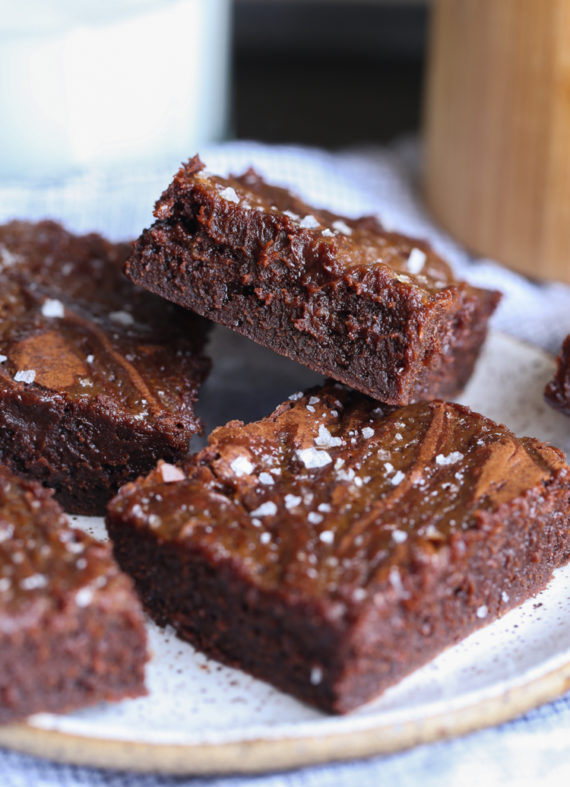 Can You Freeze Sweet and Salty Brownies?

Yes, you can absolutely freeze these brownies! Either cut them into bars, or freeze them whole in the pan. Here are some tips: 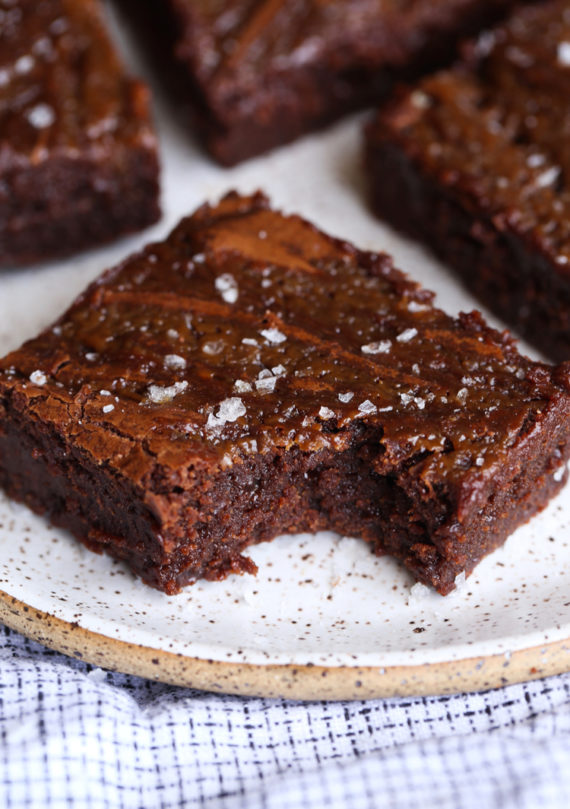 This recipe was originally published in 2013, but I updated the pictures and recipe in 2019. Hope you love seeing some of my old favorites fresh and new!

These Sweet and Salty Brownies will finally end your search for the ultimate fudgy brownie recipe. A simple homemade salted caramel is baked right into the brownies, leaving them extra rich and decadent. A sprinkle of flaked sea salt on top is the perfect garnish!

Store airtight at room temperature for up to 3 days, or airtight refrigerated for up to 5 days.

40 comments on “Sweet and Salty Brownies”